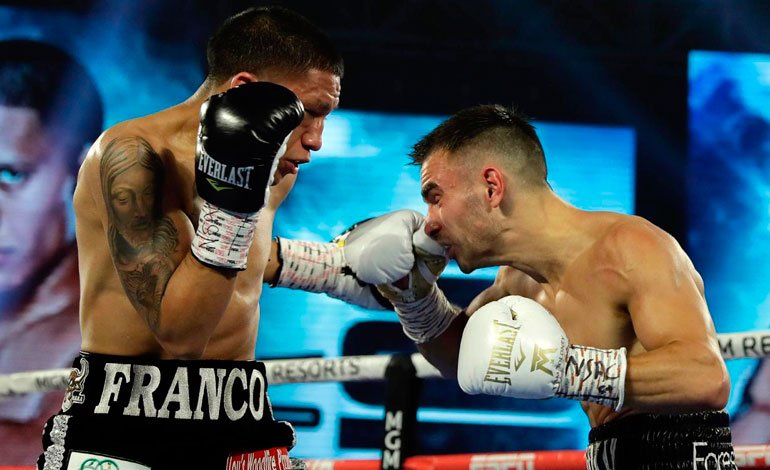 The rematch duel for the super flyweight title, World Boxing Association (WBA) version, between the Mexican-American Josua Franco and the Australian Andrew Moloney ended this Saturday in a fight without a decision and with controversy.

The 29-year-old Australian fighter went from a dream scenario to an absolute nightmare, as his bid to regain the title against Franco was ultimately unsuccessful after the fight was stopped at the end of the second round.

Moloney (21-1, 14 KOs), who had lost the title to Franco (17-1-2, 8 KOs), on June 23, in a fight held over 12 rounds, jumped to the ropes to celebrate within the MGM, when the ring doctors stopped the fight after the second round due to a swelling around the right eye of the American fighter.

However, the referee for the fight, Russell Mora, declared that the result was void, and claimed that the injury was caused by an accidental head butt.

You can also read:  Golovkin-Canelo is the fight of experience against youth, says Sulaimán

The controversy came when the Nevada State Athletic Commission consulted the instant replay, which has been approved in the state for years.

After a review that took more than 20 minutes, the NSAC declared that the result would stand as no decision, prompting Moloney to walk out of the ring in anger and an immediate outcry from Top Rank chairman Bob Arum.

“That eye was closed with 50 blows,” Moloney declared. That’s why his eye is closed, not the head butt. There are no head butts. I can’t believe this was taken from me. I have trained my butt for the last five months, I have been away from my family and they have just taken it from me. I can’t believe they didn’t give it to me. That’s why they have instant replay working right now. “

You can also read:  Ali goes back to Louisville to hang up the gloves for good

Arum was so outraged by the decision that he and NSAC CEO Bob Bennett exchanged harsh words in the front row moments later. The two quickly parted ways.

While the team members of both fighters continued with exchanges of insults before Moloney prepared to speak with reporters.

“In our instant replay rules, they state in the third paragraph that, unless there is clear and conclusive evidence that a foul was committed, unless we are 100% sure, the referee’s decision stands,” Bennett justified.

After a replay review that took more than 20 minutes, the Nevada State Athletic Commission declared that the result would stand without decision.

While the cause of the swollen eye became a source of debate, Moloney’s initial success in the fight was not. According to Compubox, Moloney threw 218 punches in just two rounds, landing 51 of them. Franco, 25, pitched 78 and posted just 18.

You can also read:  Baldomir of health risk due to fight in Yucatan

The exchange in question occurred in the first round. Mora ruled that there was an accidental headbutt, which ultimately led to the verdict of no decision.

In the second round, Franco’s right eye was completely swollen and Moloney punished him harshly with the left hook.

“This is an absolute disgrace,” Arum said. «There were no head butts. Andrew Moloney should be the new champion.

Last June, Moloney was also successful at the start of his first match against Franco, held inside the Top Rank bubble in Las Vegas, but suffered in the final rounds.