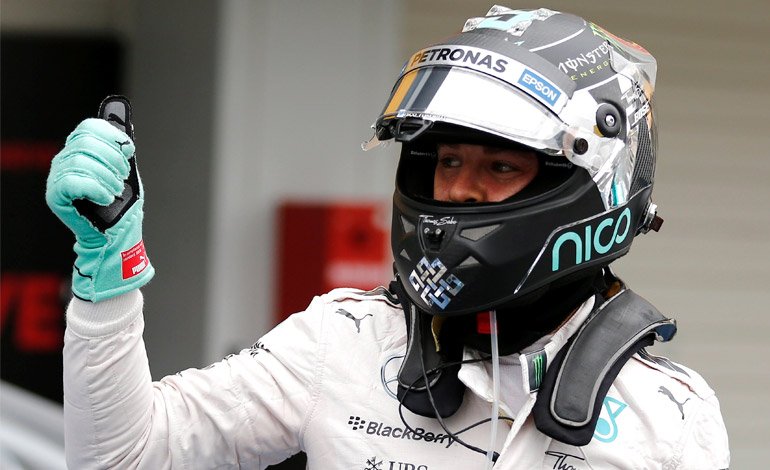 The Formula One Chinese Grand Prix, to be held tomorrow, Sunday, at the Shanghai International Circuit, promises excitement with a Nico Rosberg (Mercedes) who achieved his first pole of 2016 and could sign his third victory in three races this year.
His teammate Lewis Hamilton, current champion, will start last due to a breakdown.
That will be the most unpredictable incentive of tomorrow’s race, since the Briton has promised to give everyone a fight, and even recalled how in 2014 he came to win in Hungary, starting, as tomorrow, in last place.
Hamilton boasted today that he will undoubtedly score as little tomorrow, confident in his driving skills and the superior power of his Mercedes, on a circuit that has two of the longest straights in the championship, including the longest, 1, 17 kilometers, which will make it easy for you to overtake often.
That means overtaking at least in the middle of the grid, but the Briton does not seem to have doubts about it.
Rosberg himself was more cautious, who, although starting first – as he also did in Shanghai in 2012, when he signed the first pole position and the first victory of his career in Formula 1, accompanied in Mercedes by Michael Schumacher-, he did not lose sight of the fact that the Ferraris were up to him in practice on Friday.
If he manages to maintain his position throughout the race, Rosberg would consolidate his leadership of the World Championship with the extension of his perfect mark to date: it would be his third victory in three races, who knows if a preview that, if he continues like this all season, this could be the year of his World Cup, ahead of Hamilton.
However, the two Ferraris, who will start third and fourth, and the Red Bulls of Australian Daniele Ricciardo, who will start second, and Russian Daniil Kvyat, sixth, will undoubtedly threaten their intentions to maintain their dominance throughout the race, while from behind Hamilton will undoubtedly put pressure on everyone.
The two-time Spanish world champion Fernando Alonso (McLaren), who returned to racing after his violent accident a month ago in Australia, was on the verge of starting tomorrow in the top ten. It will do so in eleventh position.
The Chinese Grand Prix will be held this Sunday, the 17th, at two in the afternoon local time (8 hours CET, 7 hours GMT), on the international circuit of Shanghai, of 5,451 meters, which will be 56 laps, with a total of 305,256 kilometers.
The Chinese circuit, which has a very wide layout, with tight corners and several of the longest straights in the championship, including the longest, which is 1.17 kilometers long, mimics the shape of the Chinese word “shang” (“to climb” , or “next to”), first part of the name of Shanghai (“By the Sea” in Mandarin).

You can also read:  Alonso: It hurts to be so close to the goal and see how he escapes