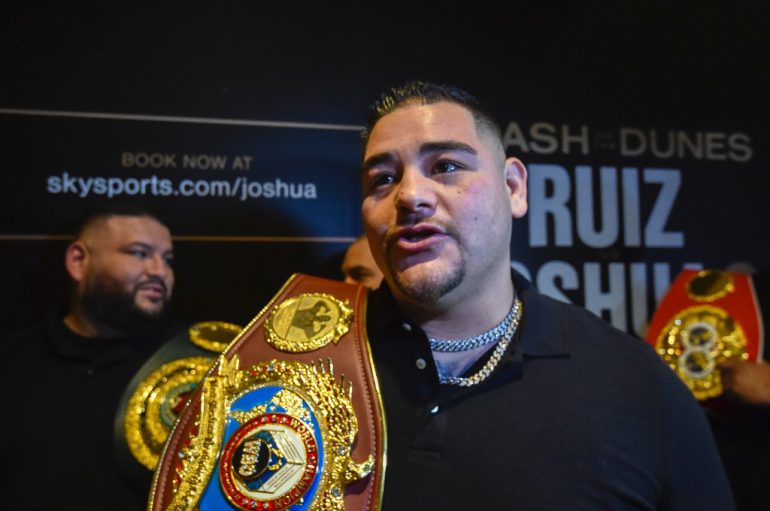 The heavyweight king Andy Ruiz Jr assured this Monday that it is the dethroned champion, the British Anthony Joshua, who has all the pressure before the rematch fight that will be played next Saturday in Saudi Arabia.

Ruiz, who was born in the United States but has Mexican origins, starred in one of the great surprises in the history of the boxing by inflicting his first professional loss on Joshua and snatching the WBA, WBO and IBF crowns from him in a June fight in New York.

Ruiz prepares in Diriyah, near Riyadh, the fight against Joshua, which has been dubbed the “Combat of the Dunes.”

“We have to see how he is because all the pressure is on him. I have no pressure because I have already achieved my dream, “said Ruiz in the Saudi capital.

Of course I want more. I want the legacy of Andy Ruiz Jr, “he added.

Amnesty International criticized the location of the fight, referring to the history of human rights violations in the Gulf country, with the murder of journalist Jamal Khashoggi and the conflict with Yemen.

The dispute of the fight in a neutral place was one of the requests of Andy Ruiz, who did not wish to fight in Great Britain.

Ruiz was “happy to be here, in Saudi Arabia.”

You can also read:  Boxer Amanda Serrano ready to win another belt

«I feel really good, like at home. Everyone has treated me with affection and I am especially enjoying the great food they have in this country.