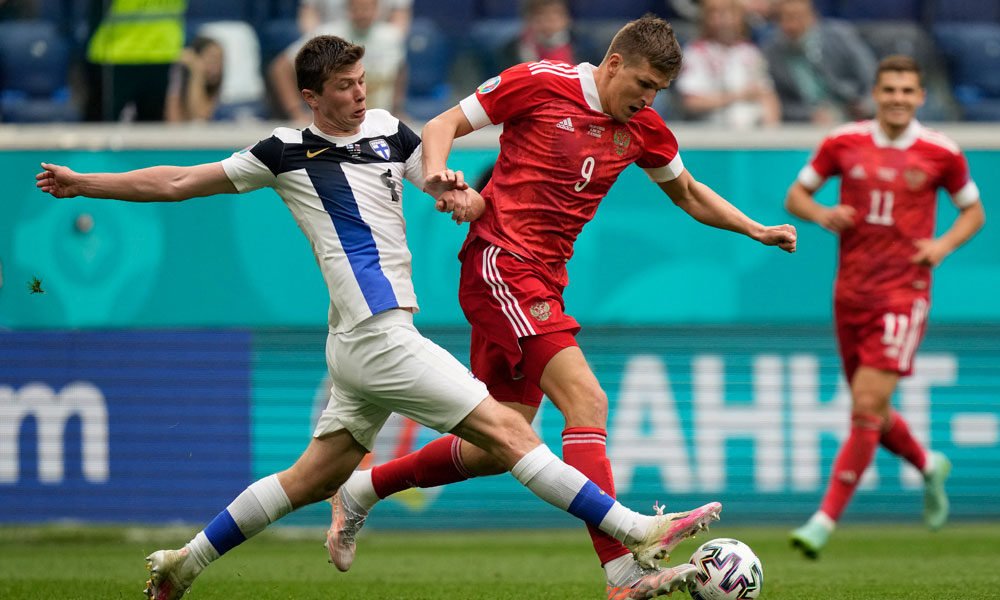 Russia managed this Wednesday to suffocate the Finnish rebellion (0-1) with great difficulty thanks to a great goal by left-hander Alexei Miranchuk on the brink of rest.

The Finns sold their skin dearly and had chances to draw, but it was finally the Slavs who took the cat to the water and three vital points for their chances of qualifying for the round of 16.

The Russians thus recovered from the heavy defeat on the first day against Belgium (3-0), while the Finns can still dream of reaching the crossroads in their first European Championship.

Finland only made one change from the team that beat Denmark. Schüller replaced Sparv in midfield. Meanwhile, Cherchesov ‘punished’ goalkeeper Shunin and center back Seménov for their poor game against Belgium. The young Safonov made his debut under the sticks. In addition, he gave the title to left-hander Alexéi Miranchuk (Atalanta).

The Finns put fear in the body of the local fans with a goal as soon as the game started through Pohjanpalo, the author of the historic target at Parken in Copenhagen but the referee annulled the goal for a tight offside.

You can also read:  Manchester City meets Bruges and touches the eighth

From there the Russian siege began. Ozdóev had the first goal in his boots after a good collective play, but his free shot inside the area went well over the crossbar. Shortly after, again to Miranchuk’s pass, the giant Dzyuba shot off the post, but he was in an offside position.

But the “eagle owls” did not give up and also sought the back of the advanced Russian rearguard. Pukki and Pohjanpalo forced Safonov out of goal more than once. Also, Kamara was a dagger from the left.

Mario Fernandes, who had struck several times for his band and is a key man in the Russian team’s scheme, had to be replaced after falling on his back in a header and transferred to a health center.

Pukki, the great Finnish threat, had his team’s best chance after half an hour. After a magnificent combination, the ball reached the edge of the large area, but he shot poorly.

You can also read:  The renewal of Ansu Fati is in danger due to the low values ​​of his contract

In the Russian squad, all actions were looking for Dzyuba, but the Zenit striker was closely watched by the visiting towers.

Only an individual move could bring down the Finnish wall. On the verge of half-time, Miranchuk received the ball on the edge of the area, made a wall with Dzyuba and, after clipping a defender, subtly placed the ball out of the goalkeeper’s reach. A great goal that would end up being decisive (min. 47+)

The Finns went all out in the second half, which kicked off with an unbeatable chance from Pukki. A long pass to the Norwich striker after a steal in midfield, but as he was about to shoot Safonov, Divéev hindered him enough for his shot to go high.

Golovín responded with a shot from outside the area that went around the right post. Next, Pukki put Safonov to the test.

The game had rhythm, but it was the Finns who now had the initiative. On counterattack the Russians did damage. Zhemaletdínov and Kuzyáev were able to sentence, but on one occasion poor aim and on another Hradecky’s mitt prevented it.

You can also read:  America defeats Pumas and remains the leader of the MX League Apertura

As the minutes passed, the Russians slept the match and the Finns seemed to run out of ideas in attack with the substitution of Pukki. Only at set pieces did they disturb Safonov.

Incidents: match corresponding to the second day of Group B of the European Championship played at the Krestovski stadium before some 24,000 spectators.