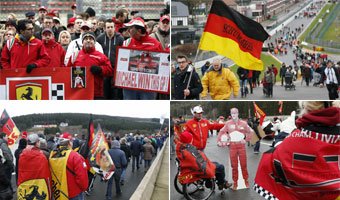 Former Formula One world champion Michael Schumacher has already received more than a thousand letters, as well as gifts and personal items, at the Grenoble clinic (France) where he has been in a coma for four weeks, while speculation about his future grows . “Nothing indicates that the doctors are going to wake him up soon,” says the popular German newspaper “Bild”, in its edition today regarding the pilot’s situation, after the serious skiing accident suffered on December 29 in the French Alps .
The weekly “Focus” echoes the opinions of Steven Laureys, a prestigious Belgian neurosurgeon, according to which, after a month in an induced coma, neurological limitations are usually present in the event of awakening.
Said doctor also points out that the percentage of those who manage to wake up after six months in a “vegetative situation” is 20%, while after a year this return occurs “on very few occasions.”
The doctors who treat the pilot in the French clinic where he was admitted after his accident have limited themselves to saying, in their last parts, that Schumacher is still in a “stable” situation.
On the part of the pilot’s environment, his representative, Sabine Kehm, has expressed the family’s total confidence in the medical team that treats Schumacher, who turned 45 on January 3.
Schumacher suffers “diffuse and serious” head injuries, according to recent reports, after hitting his head on a rock while skiing, wearing a helmet, at the French Meribel resort.
In his first week of hospitalization, the German underwent two neurosurgeries and the doctors noted a slight improvement in his condition, although they have not yet awakened him from the coma in which they are keeping him to facilitate his recovery. EFE

You can also read:  Ecclestone: I got kicked in the head and I was knocked unconscious