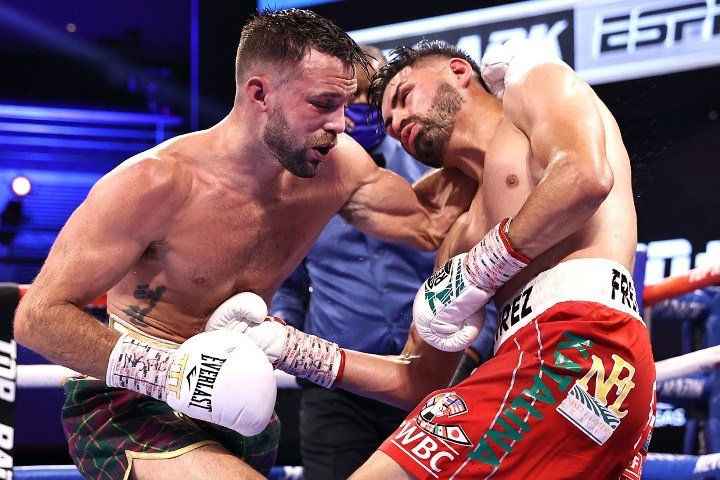 Scottish Josh Taylor was crowned unified champion of four super lightweight organizations by defeating Mexican-American José Ramírez by unanimous vote (114-112 on all cards) in a fight held this Saturday in Las Vegas (Nevada).

Taylor (18-0, 13 KOs), 30, kept his titles from the International Boxing Federation (IBF) and the World Association (WBA), while he snatched Ramírez (26-1 and 17 Kos) the of the World Council (WBC) and the World Organization (OMB), in addition to taking away the undefeated.

You can also read:  Juan Manuel Márquez will return to the ring on July 19

There was no study assault. The fight from the beginning was intense and very even in the first three chapters, the Mexican being a little better in the third with several very effective combinations.

After five rounds of fierce combat, the Scotsman finished that section with a cut above the left eye, but starting the sixth he sent the Mexican to the canvas with a left foot to the face, for a protection count.

In the seventh, at the end of the chapter, the Briton again knocked down the Mexican-American with a hook to the chin. Ramírez stopped in poor condition but was saved by the hood.

You can also read:  Cuba continues to win in the World Series of Boxing

After ten rounds, it seemed that the European would keep all the titles at stake after landing the best blows with his effective fight plan.

The Scotsman had won the IBF version with a unanimous decision victory against Ivan Baranchyk in the semifinals of the World Boxing Super Series in May 2019. Taylor then defeated favorite Regis Prograis by majority decision in a great performance to earn the belt. of the AMB.

The Briton scored an easy victory after a first round TKO over Apinun Khongsong in September to retain his titles.

For his part, Ramirez had won the vacant WBC title with a unanimous decision victory over Amir Imam in March 2018. Sixteen months later, Ramirez added the WBO belt with a sixth TKO victory over Maurice Hooker. He defended the belts once, in a majority decision win over Viktor Postol in August. (GG) (AFP)

You can also read:  Documentary about "Maravilla" Martínez premieres