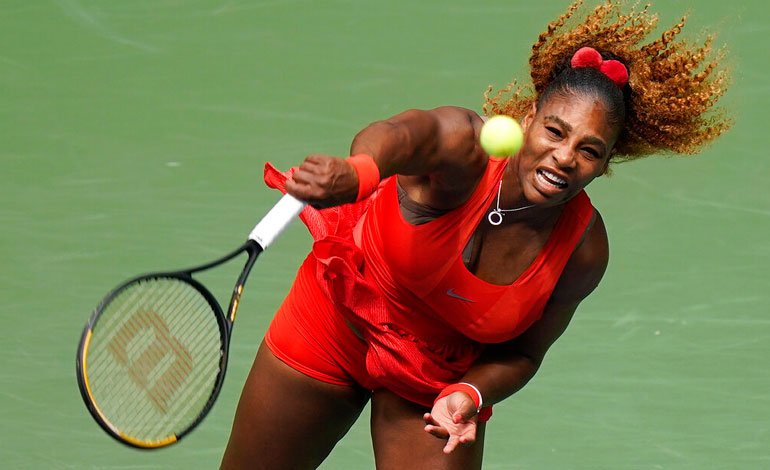 The American Serena Williams raised a set against again to defeat the Bulgarian Tsvetana Pironkova and qualify for the semifinals of the United States Open, where the Russian Daniil Medvedev, one of the favorites of the men’s team, also advanced.

Baptized by the US Open itself as “Mother’s Day” in Flushing Meadows, Serena suffered to defeat Pironkova, who has captivated in this tournament in which she returned to tennis after three years of maternity leave.

After losing the first set 4-6 and the Bulgarian breaking her serve in the next game, Serena took out her champion claw and won the next two sets 6-3 and 6-2 in a total of two hours and 11 minutes of play on the main court Arthur Ashe.

With this victory, Serena reached her thirteenth semifinal in New York and will now face the winner of the last quarterfinal match on Wednesday between former world number one Victoria Azarenka and Belgian Elise Mertens.

Serena Williams, Pironkova and Azarenka broke the record for mother tennis players classified to the quarterfinals of a Grand Slam at this Open.

That brand “just shows how tough we mothers are. If you have a baby you can do anything, ”said Serena, who underscored Pironkova’s achievement of reaching the fourth of a ‘Major’ on her comeback.

“I could barely win a game when I came back, she is incredible,” said Serena, who was off the court for 14 months after becoming a mother in September 2017 and subsequently suffering a pulmonary embolism.

At 38, Serena Williams is still on the hunt for her 24th ‘Major’ title to equal Margaret Court’s record, leaving behind other fierce players such as Sloane Stephens of the United States and Maria Sakkari of Greece, whom she also beat in the third. set.

Pironkova, 32, gave birth to her son during her break from tennis but decided to take up the racket again in 2020 and showed that she is capable of reaching the later stages of a Grand Slam again, as she did in the quarterfinals. Roland Garros in 2016 and in the Wimbledon semi-finals in 2010.

Although Serena started the game with five service points in her first two serving games, Pironkova was undaunted and broke serve the next, putting her on track to win in the first set.

The Bulgarian achieved another ‘break’ in the first game of the second heat putting Serena on the ropes who, lacking the energy that fans usually give her at Flushing Meadows, increased the intensity and began to return all the blows fiercely of his rival.

In her first opportunity, Serena broke her serve and mentally broke the Bulgarian with her ‘aces’ (20 in the whole game to 4 of her rival) and points won in several memorable exchanges of blows.

In the third and final set, the American quickly took the lead and secured a place in the top four at the US Open, a tournament she has lifted six times.

On Tuesday, the first women’s semifinal of the Open was defined, which will star the Japanese Naomi Osaka, winner of the US Open in 2018, and the American Jennifer Brady.

Medvedev built his victory against Rublev (10th seed), his childhood friend, coming back from 1/5 in the tie break in the first set.

“At a time like that you have to fight for every point but at the same time I was like, ‘well, I probably lost the set.’ I had a better chance of losing it than winning it, “recalled Medvedev.

You can also read:  Djokovic looks to break another record at Wimbledon

Rublev, 22, could not recover from the emotional blow of losing the set, which he fought in frustration, tossing his racket to the ground and gesturing for the rest of the match.

Medvedev, who had to receive medical attention on his shoulder during the third set, let out a cry of rage at the end of the crash, grateful to be able to quickly eliminate Rublev, whom he has known since the age of eight.

“It is the first time in almost a year that I celebrate my victory because it was very hard and I felt that it could put me in trouble (…) He was playing incredible,” said Medvedev, 24 years old.

In search of his first Grand Slam title, the Russian will face in the semifinals the winner of Wednesday’s other quarterfinal match between Austrian Dominic Thiem (2nd seed) and Australian Alex de Minaur (21st).

The other men’s semifinal was defined on Tuesday and will be played by German Alexander Zverev, fifth seed, and Spanish Pablo Carreño.

This US Open will be the first Grand Slam of the last four years that will have a winner other than the ‘Big Three’ (Djokovic, Nadal and Roger Federer). AFP (HN).