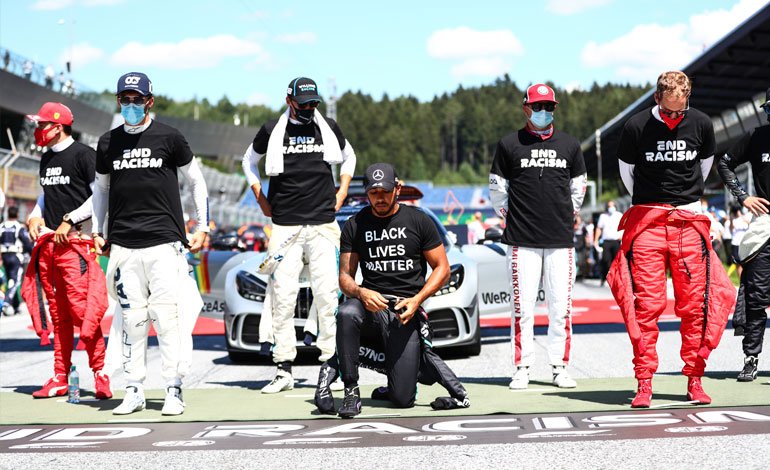 Fourteen of the 20 Formula 1 drivers, including Lewis Hamilton, who wore a ‘Black Lives Matter’ jersey, dropped to one knee in support of the fight against racism, before the start of the Austrian Grand Prix.

The others wore T-shirts with the words ‘End Racism’.

The pilots had agreed to express each in their own way their commitment against racism. The Dutch Max Verstappen (Red Bull), the Monegasque Charles Leclerc (Ferrari), the Spanish Carlos Sainz Jr, the Russian Daniil Kvyat (AlphaTauri), the Italian Antonio Giovinazzi (Alfa Romeo) and the Finn Kimi Räikkönen (Alpha Romeo) stayed standing.

“I think it is the everyday events and behaviors that are important rather than the formal gestures that could be perceived as controversial in some countries,” Leclerc, 22, wrote on Instagram before the race.

You can also read:  Nairo Quintana was run over during training in Colombia

“I will not put my knee on the ground but this does not mean at all that I am less committed than others in the fight against racism,” he added.

Verstappen seconded him on Twitter: “I think that everyone has the right to express themselves when and in the way they want. I will not put my knee on the ground but I respect and support the personal choices of each driver.

At the instigation of world champion Lewis Hamilton, various drivers and teams, as well as F1 and the International Automobile Federation (FIA), have pledged against racism in recent weeks, following the death of George Floyd in late May in Minneapolis at the hands of a white cop. AFP (HN)

You can also read:  Lewis Hamilton says he was "misunderstood" after sharing a video