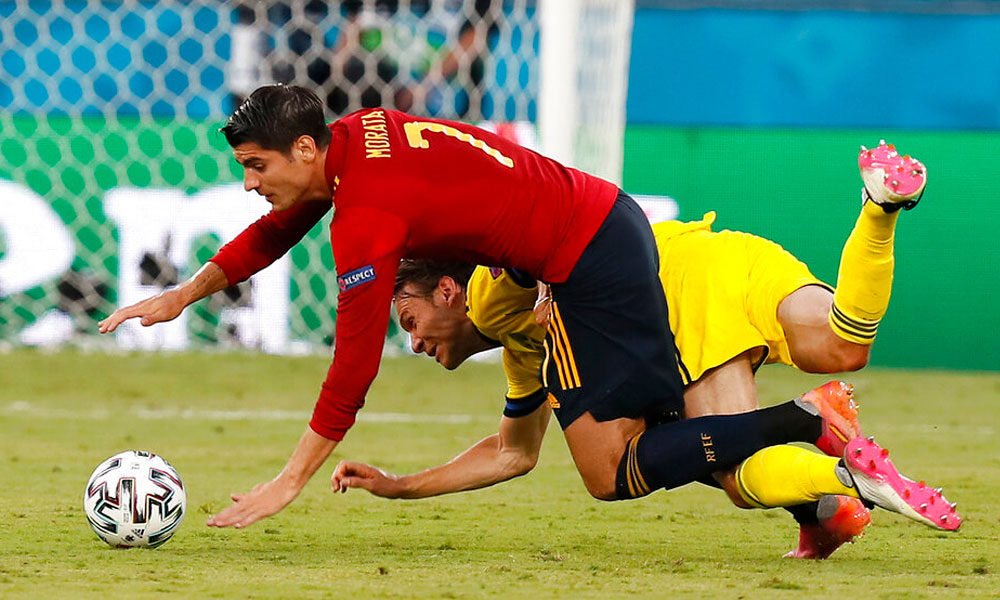 Spain has become too used to drawing, five in its last eight games; the same result with which it premiered at Euro 2020 against Sweden (0-0), between the recurrence of Álvaro Morata on a tremendous occasion and the team in general, imposing the first half and much less the second.

The Spanish team is not a favourite. Not even in Seville. He has a long way to go to earn a condition that he deserves with victories, with goals, with much more resounding, solvent and appreciable arguments than those currently proposed by Spain, who play well at times, who do not do well at others, that it crashes in its own offensive inefficiency and that it is perceived vulnerable behind.

If someone won the victory, it was her, without a doubt, against Sweden, but she could win as much as she could lose. If between Marcos Llorente and the post they hadn’t repelled an opportunity from Isak. Or if Berg, only for the shot at one meter, had not screwed up when the match was already moving in a stressful uncertainty.

Almost always unpredictable in each line-up, Luis Enrique was more predictable than ever in his eleven -without a single nuance out of the expected, with two left-handed central defenders, with Unai Simón as goalkeeper and Álvaro Morata as forward-, but also in the mechanisms who has always worked so hard, from pressure to possession or vice versa, as happened in his European debut against Sweden, with lucid moments, with others not so much. It is still very far from being incontestable, not even as resolute as it pretends.

So complex in football, so overwhelming for the rival when everything works like a perfectly tuned block, so harmful to oneself when the slightest mismatch arises, such skills are hallmarks in the new cycle of the national team, in that edge also of risk in which a team still to reaffirm itself moves, which falls short in the most important area: the areas.

In this key process that still has to be rounded off to express itself as a real and main favorite in a tournament of such dimension, in which any carelessness can put you in a bind, Spain transmitted this Monday some certainty, but also doubts, so recurrent one and others in their last disputed commitments.

The present of Spain needs more goal. It’s a no-brainer. There is no other way to understand the goalless tie with which he went into the break and at the end, mainly explained by an action above the rest, in the 37th minute, when an improper error of this level, made by Danielson, put Morata before the goal, alone, with no more opposition than the goalkeeper, from whom he did not even demand a save.

His shot was lost too crossed, deflected, without the precision with the right that such a visible opportunity required, without the determination of a scorer, be it him, Gerard Moreno -substitute- or any other, which must be essential to think about the tall challenges that Spain proposes. Without a goal, the mission is impossible.

Later, Morata also failed another one, less clear at the beginning of the second half, pointed out again by one sector of the public, encouraged at the same time by another, while Spain was no longer what it had been in the first act, in the absence of half hour in suspense, not knowing very well how to unclog a match that was already a hieroglyph for him. Less than half an hour later, the attacker left between majority whistles. In that sense, the entry of Gerard Moreno in 74 seemed late.

And to the present of Spain the lack of defensive forcefulness. In the middle. And in the goal. The election was as expected, Unai Simón. Almost always a spectator, he emerged attentive to the first demand, a center that preferred to clap over the crossbar, just in case, but hesitated when he shouldn’t doubt, when determination is the goalkeeper’s best virtue, when Isak – back in the minute 42- scared the team, saved by the lateral Marcos Llorente and the post.

Even more alarming was the following Swedish approach, already for the hour of play, especially because Isak did everything he wanted in the area, between three rivals, who rather than stalk him invited him to a maneuver that was not a goal because Markus Berg finished off The gift of the 0-1 was fatal, because of the grass or because of the execution, but it was nonsense.

It is true that Sweden was nothing more in attack than what Spain left him, even less at the beginning, devoured when he found the ball on occasion, without a single option to discover more horizon than the midfield, irrelevant with the ball in attack or in any sector, was a block compacted in its territory, entrusted to a structure, to a game of resistance that challenged Spain.

Although a dry and slow grass did not benefit him, the ball was almost always an exclusive property of Luis Enrique’s boys, led by Koke. If Spain is looking for a leader, there you have one.

A year ago, when the European Championship was going to be played, I would not have gone. It was not in Luis Enrique’s plans. Nor was he at the same level as always at Atlético. He had disappeared from the selection lists. The midfielder, whose comeback from November to June has been unstoppable, never gave up, straight into a crucial role.

Now he is a basic footballer, more starter than anyone -or almost anyone- in Luis Enrique’s scheme. It is the axis on which the transition of Spain turned, the moment in which a maneuver, a pass, a delivery, the vision of sending at the right moment, transform a tiresome possession into a crossroads for the rival. It started off well, then it faded as time went on.

Because, through him, Spain saw the way at the beginning. On the left, when he connected with Jordi Alba; on the right, associated with Marcos Llorente; or in the middle, when he proposed to Dani Olmo the chance of the 1-0 header that Olsen denied, stretched, accurate, savior, with his left hand to a shot that was a goal.

You can also read:  Neymar drops from Brazil to play against Argentina

Koke was in practically everything that could be understood as an occasion that the Spanish team invented in the first half between the defensive framework that Sweden devised. The Vallecano midfielder also finished off. First with a deflected right inside the area, then with the arrival that connected with the high left foot, at the service of the remarkable Dani Olmo, who also tested Olsen before the break.

But another Spain came out of the locker room, predictable, imprecise, insubstantial, without occasions, without the ability to remove a tie that would not have been such with a pinch more goal. The Spanish team does not have it. Or it doesn’t show. Not even when Gerard Moreno’s departure made it roar as it had not done in the entire duel at La Cartuja stadium. His final header deserved it. In the 89th minute. Olsen stopped him. There was also no way. A draw for reflection.

Incidents: match corresponding to the first day of group E of Euro 2020 played at the La Cartuja Stadium in Seville before 12,517 spectators. King Felipe VI and Aleksander Ceferin, president of UEFA, witnessed the match from the box. EFE (hn)