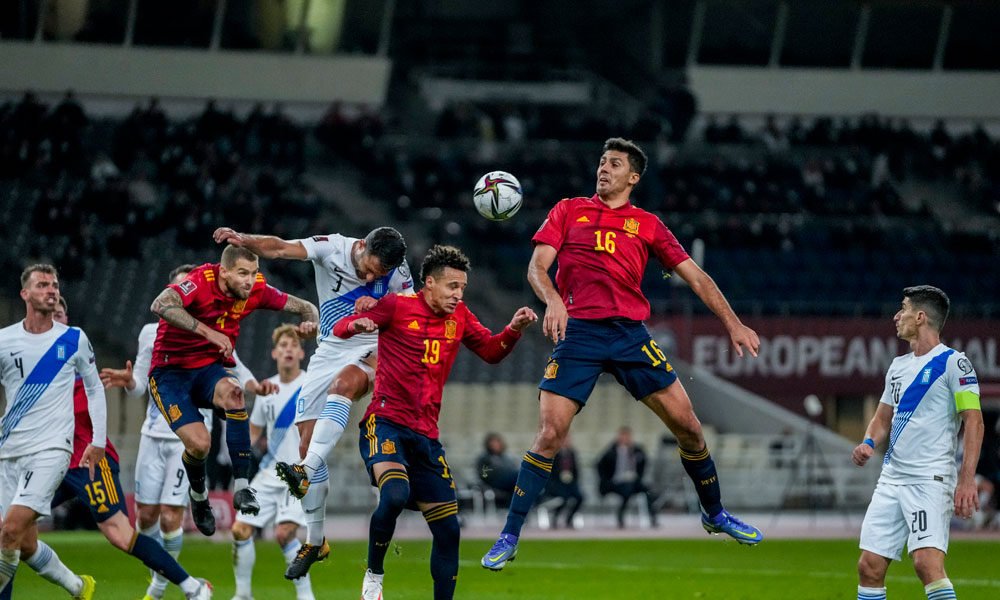 Away from the brilliance that it exhibited in the final phase of the League of Nations, winning a penalty with just enough, with more defensive firmness than offensive merit, the Spanish team turned its situation around, taking advantage of Sweden’s slippage to assault the leadership group thanks to both Pablo Sarabia and faces the ‘final’ in Seville with the option of a tie to get out of trouble.

The situation gripped Spain, the obligation to win. He could not miss the opportunity that was presented to him with the unexpected stumble in Georgia of his rival for the direct square to Qatar, to alleviate his situation and face his last appointment by reducing the pressure. It will earn you a point at La Cartuja after doing your homework in Athens. No hell in the stands of the Olympic, lackluster but signing his first goal after rediscovering the difficulties he suffers when the rival joins lines and opts for a defensive approach.

Luis Enrique’s continuous search for solutions leads him to never repeat a team and never stop surprising. He sat down the leader, Sergio Busquets, and went from playing the final phase of the Nations League without 9 to joining two, Álvaro Morata and newcomer Raúl de Tomás. It was difficult to find them and when they had the opportunity to score they lacked success. Spain shines before the big ones and is disfigured against lesser rivals.

Greece still had options, remote but real. His initial momentum had left a soft head from Androutsos at the hands of Unai Simón, but his message, launched on the counterattack, the only way he could harm Spain, came with Masouras’ right to the net, annulled for offside at 21 minutes. By then Spain was already chewing possession looking for non-existent spaces, longing for a player who overflows in one-on-one and playing with one gear less than the one demanded by the game.

The mobility of the trident, with the continuous exchange of positions between Morata and De Tomás, did not generate the expected imbalance. Gavi, installed in the title in his third consecutive game at the age of 17, was the only one who broke lines, with Gayà decanting the game to the left with his continuous increases, while Carvajal on his return appeared little but covered behind to stop any attempt of the rival.

In that scenario, without shots on target from Spain, the action that broke the game took place. From a shot by De Tomás that diverted the defense to a corner, Íñigo Martínez got a penalty when he was about to finish off with which he settled bills from the past. In the first leg, in Granada, in the tie that complicated the road from the first qualifying game, a disputed action of his cost the maximum penalty against and the tie. The responsibility was assumed by Pablo Sarabia who closed the streak of five consecutive penalties missed in maximum penalties that did not arrive in a final shootout.

You can also read:  Pedro Troglio ready to lead on Sunday

Once the most difficult thing was achieved, opening the game with a goal, Spain hoped that Greece’s playoff options would prompt them to change their approach. The game would last as long as it took to score his second goal and Morata wasted the best chance before the break. He cut from the right with class and shot from the left to the shoulder of Vlachodimos, who avoided the sentence.

That tranquility did not come, nor was it deserved by a team that forgot to attack in the second act and limited itself to defending with intensity to save its loot. He played with fire in the uncertainty but never feeling his victory in danger. Unai Simón was a mere spectator and just from a set piece, in a lateral foul combed by Tzavellas came the only scare.

You can also read:  Barcelona transfers Emerson to Tottenham for 25 million euros

The changes of Luis Enrique did not work either and the spaces to run were wasted when Grecia took the expected step forward. Dani Olmo’s speed and Rodrigo’s return did not improve the offensive balance. Spain did not shoot at the door again, it was bored but it achieved what it needed. The move to Qatar is one step away, avoiding discredit and the danger of a play-off that opens its format involves scoring against Sweden with the heat of the Sevilla fans.

Incidents: match corresponding to the penultimate day of the 2022 World Cup qualification phase, played at the Olympic stadium in Athens before 21,000 spectators. EFE (HN)