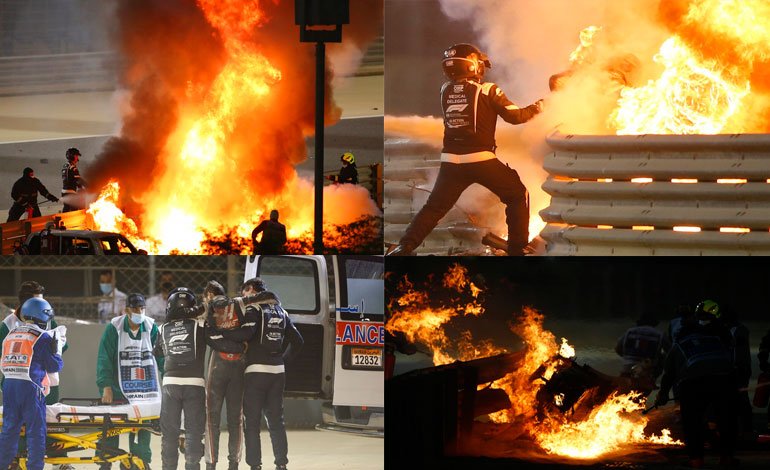 Frenchman Romain Grosjean (Haas) suffered “minor burns” and “possible broken ribs” after the fire of his car after running off the track at the start of the Bahrain Grand Prix, which was interrupted by AFP.

Grosjean’s car ran off the track and started a fire. The Frenchman confirmed by radio that he was fine, before getting into the medical car to be examined, following protocol.

At the exit of the third corner, Grosjean’s F1 left the track after a contact between one of its wheels and one of Russian Daniil Kvyat (AlphaTauri), hitting the safety barriers at full speed.

On impact the chassis broke in two and the gasoline came out, causing a fire, but the 34-year-old pilot was able to get out and away from the fire to go to an ambulance.

He suffered “slight burns to his hands and ankles” but is doing well, his team quickly announced in the media. He was taken to the hospital by helicopter. Then “possible rib fractures” were announced.

Formula 1 racer Romain Grosjean escapes unscathed after suffering an accident during the race for the Bahrain Grand Prix.@SertvSports
#NewsSertv pic.twitter.com/Dx966g3zY8