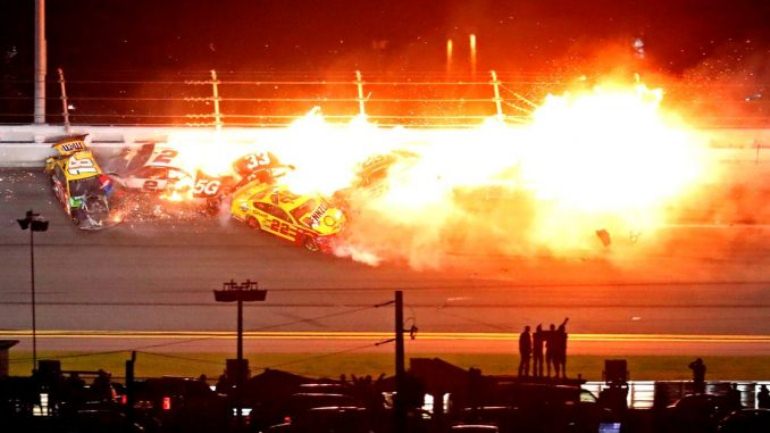 Along with the Indianapolis 500 and the Sebring 12 Hours, it is one of the most important races in American motorsports, and it often opens the NASCAR championship, the most important category of cars with a roof in North America. This is the Daytona 500 that ran its 63rd edition yesterday. After a controversial definition in the last meters, Michael McDowell (Ford) won, who won for the first time in the mythical oval. This was his triumphant debut in the NASCAR main series (there are three in total) after 358 races,

As is usual in the races of this division, the so-called “Big Ones” could not be missed, which is the multiple accident that usually occurs in the banked curves of the ovals. This time he arrived on lap 14 of 200, where 17 cars were involved. Less than 45 minutes after the start green flag was waved, entering Turn 3, Kyle Busch (Toyota) pushed the rear of Christopher Bell (Toyota), who then hit the rear of Aric Almirola (Ford).

Almirola lost control of her car and went towards the line of cars that were coming in the other row, causing a huge chain crash. Among those who suffered extensive damage and were left out of the contention for victory were the author of the pole Alex Bowman (Chevrolet), Almirola himself, Ryan Blane (Ford), the Mexican Daniel Suárez (Chevrolet), David Ragan (Ford) and Ryan Newman (Ford).

“They took us out too soon. It’s a very, very long race, ”Almirola said. “We were in a good position, spinning between the top two or three and (Bell) came in and hit me really hard in a bad place. It made me turn to the right, wrecked our car and ended our race too early, ”he added.

You can also read:  Hamilton demonstrates in London against racism

Ragan, whose participation in the 500 is his only planned outing of the 2021 season, called the situation “unfortunate.” He stressed that “I’ve never met a driver who said, ‘I’m going to start this 500-mile race and just be super aggressive.’ We all talk about giving and receiving and reaching the end, but it seems that no one does it once it comes out.

“It’s frustrating that everyone’s pushing and shoving, and I just saw (Bowman) get doubled over and every time someone crashes into the top five or six he wrecks a lot of cars,” Ragan concluded.

As if this were not enough, a lightning strike in the area forced the red flag to be raised and the race suspended for a minimum of 30 minutes before some of the vehicles damaged by the heat of the fight arrived at the Daytona pits, which In its mixed circuit it receives another traditional competition in North America such as the 24 Hours, where Sport Prototypes and Gran Turismo cars compete.

You can also read:  Coulthard, winner of the Race of Champions in Barbados

“Obviously we had a very fast Camaro. The Chevrolet were working well together; hopefully a Chevy still ends up on Victory Lane, ”Bowman said. “Hats off to everyone at Hendrick Motorsports; They have built some really fast racing cars. I hate that super oval racing works like this sometimes, but that’s part of the game, ”he stressed.

However, there were more strong emotions and hearts stopped on the last lap where another crash, not so many cars affected but no less spectacular because of the fire in some of them, defined the race.

Joey Logano (Ford) led the final 25 laps, but his Ford teammate, Brad Keselowski (Ford), touched Logano and next to him, McDowell, who was third and went to the lead when the yellow flag ended the race. Behind there were more broken irons, but like the initial incident the pilots suffered no physical consequences.

You can also read:  Button: "Frustrating race, but we are making progress"

The authorities analyzed what happened for almost ten hours and decided that McDowell was not responsible for the accident and was awarded the victory.

The NASCAR Cup kicked off its 26-race regular season where the top 16 finishers will compete for the crown in the Playoffs, which are ten other competitions.

The next date will be next Sunday, again at Daytona, although with the O’Reilly Auto Parts 253 dispute. (GG) (Infobae)