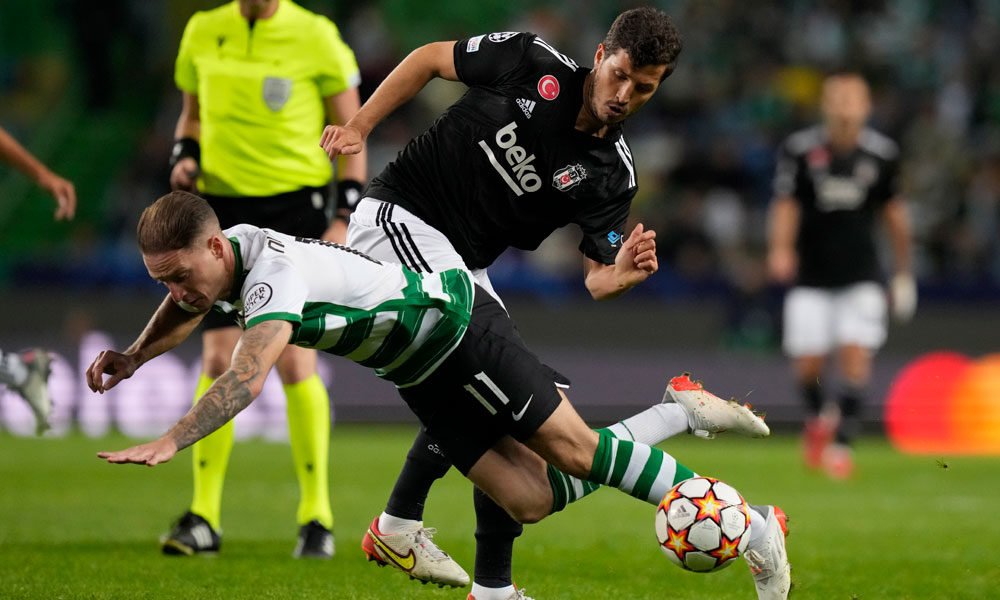 Pedro Gonçalves ‘Pote’, Portuguese midfielder who passed through the Valencia youth team, was the star of the night with a double in Sporting’s defeat of Besiktas (4-0) that leaves the Turks without options and puts him in the fight for second place, since it is third with 6 points, the same as Borussia Dortmund.

With two high-quality jabs, Pote scored the first two goals to put the win at José Alvalade in Lisbon on track.

From the start, Sporting went for the match and the first clear opportunity came in the 8th minute after an excellent counter between Pote, Sarabia and Paulinho, who finished at pleasure in the small area and crashed the ball into the post.

A minute and a half later, the top three came together again in a similar play that Paulinho finished off and was saved under the sticks with one foot by the Turkish Under-21 international goalkeeper Destanoglu.

On the pitch, four Spaniards: Adán, Sarabia and Porro, for Sporting, and the Besiktas center-back forged at Atlético de Madrid Francisco Montero.

However, at 17 minutes, the first setback for the Lisbon team, who were left without Spanish international full-back Pedro Porro, who was replaced due to injury by Ricardo Esgaio.

In the 28th, the Turks’ first clear approach after a defensive oversight by “the lions”, who after a throw-in left Canadian Cyle Larin alone in the area, who fired too wide.

On the next play, the most active of the game in the first half hour, Pote suffered a clear push inside the area and the Russian referee whistled maximum penalty.

He himself scored it to open the scoring in the 30th minute, after deceiving the Besiktas goalkeeper.

In the 38th Pote extended the local advantage and signed the 2-0. Masterful definition in a ball he received inside the area. He faked with his left, adjusted it to the right and adjusted the ball to the near post.

You can also read:  Koeman reviews the Barça news in 9 proper names

The scoring party did not stop before the break as center forward Paulinho made it 3-0 with a shot from outside the area. The Turkish goalkeeper was not fine.

Yalçin, Besiktas coach, aware that if he lost he would be eliminated from the ‘Champions’, decided to risk in the second half and took out the Brazilian midfielder Alex Teixeira to replace the Spanish Francisco Montero.

Two minutes after the restart, Sarabia was able to score the goal of the day with a center-kick from the left that went to the crossbar, already with the goalkeeper beaten.

The award to the Spaniard given by Paris Saint Germain came to him in the 55th minute, when he took advantage of a rebound in the area that he finished off at the back of the net.

With this victory, Sporting will play a decisive home match against Borussia Dortmund on November 24, with whom they lost 1-0 in Germany, while on the last day they will face Ajax in the Netherlands.

You can also read:  Florentino Pérez denies 'any influence' in Barcelona's Messi march

Referee: Sergey Karasev (Russia). He admonished Josef and Larin, and sent off Souza, from Besiktas, for a double yellow.