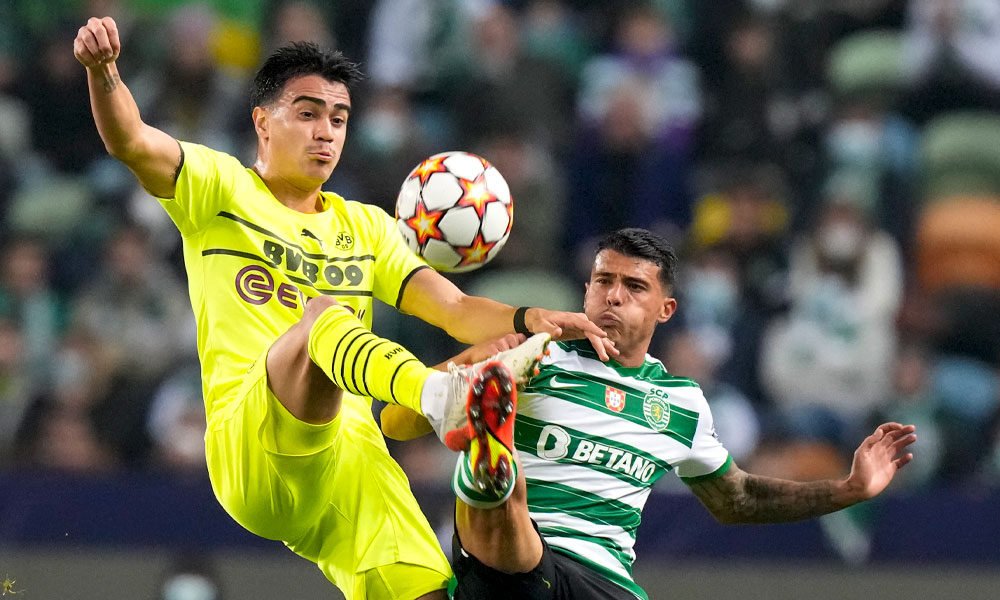 A double by Pedro Gonçalves «Pote» and a goal by Pedro Porro made it possible for Sporting de Portugal to win (3-1) against Borussia Dortmund, which is why they are already qualified for the second round of the Champions League as second in the group and remove the German team from the competition.

The two teams reached this fifth day tied at 6 points and the Portuguese Pote became the protagonist of the game after scoring a double in the first half that was rounded off by Porro in 81 after scoring in the rejection of a penalty that Pote missed. .

In the first quarter of an hour, Borussia Dortmundo came out more plugged in and created more danger than “the lions.” The ball circulated better with the possession of the Germans and that they did not have their star Haaland or Thorgan Hazard, who two days ago tested positive for covid.

However, in the 30th minute, when the Dortmund team controlled the match the most, the first goal of the match arrived, the work of the Portuguese player with the greatest scoring nose, Pedro Gonçalves «Pote», who passed through Valencia in the youth team.

You can also read:  Boca Juniors eliminated River Plate from the Argentine Cup on penalties

Long ball by the Uruguayan center-back Coates that the German side Nico Schulz controlled badly on the edge of the area and served on a tray so that Pote was left alone against the Swiss Gregor Kobel, whom he beat at pleasure.

After the goal, the Sporting of the Spanish Adán, Porro and Sarabia came up and in 38, after a good combination on the left of the Verdiblancos, the ball arrived at Pote’s feet on the edge of the area and starred in an excellent right hand that went to the back of the net. The stands went crazy with the 2-0.

Borussia woke up and a minute later the Dutchman Donyell Malen showed off his dribbling ability, sat down Antonio Adán and with the door empty, the Portuguese center-back Gonçalo Inácio took what looked like a sung goal under the sticks.

The break was reached with the result of 2-0 and in the resumption the side Schulz remained on the bench and was replaced by the medium Emre Can.

However, the first clear was Sporting in 48 with an excellent counter between Sarabia and Pote. Once inside the area, Pedro Gonçalves served for the Spanish interior but the Swiss goalkeeper covered very well any shot from Sarabia, who arrived this year in Lisbon on loan from PSG.

You can also read:  Barcelona pressures Bayern Munich with the loan of Kingsley Coman

The Portuguese yielded the leading role to Borussia waiting for a counter to kill the match.

With this result, Borussia was eliminated so Marco Rose starred in a triple change to give entry to Tigges, Dahoud and Zagadu.

However, in the 75th minute Borussia suffered a new setback, as the Spanish referee Carlos del Cerro Grande expelled Emre Can, who had entered after the break, for attacking Pedro Porro.

The controversial play of the match took place in 79, when the Portuguese striker Paulinho fell in the Borussia area. Del Cerro Grande stopped the game and had to see the images before the VAR warning. Finally, he decreed the maximum penalty.

Pedro Gonçalves “Pote” caught the ball, placed it on the penalty spot and the goalkeeper guessed the trajectory, although in the rebound the Spanish cheek keeper Pedro Porro headed the 3-0 lead.

With the game resolved, Portuguese coach Rúben Amorim made his 18-year-old Portuguese left-back Flávio Nazinho debut for the first team.

And when 4 minutes of regulation time passed, the Dutch Donyell Malen scored the final 3-1.

With this result, Sporting, which started by losing the first two group stage matches to Ajax and Borussia, reached the second round of the Champions League.

Referee: Carlos del Cerro Grande (Spain), who admonished Palhinha and Coates, from Sporting, and expelled Emre Can from Borussia.

Incidents: Match of the fifth day of Group C of the Champions League played at the José Alvalade Stadium in Lisbon. EFE