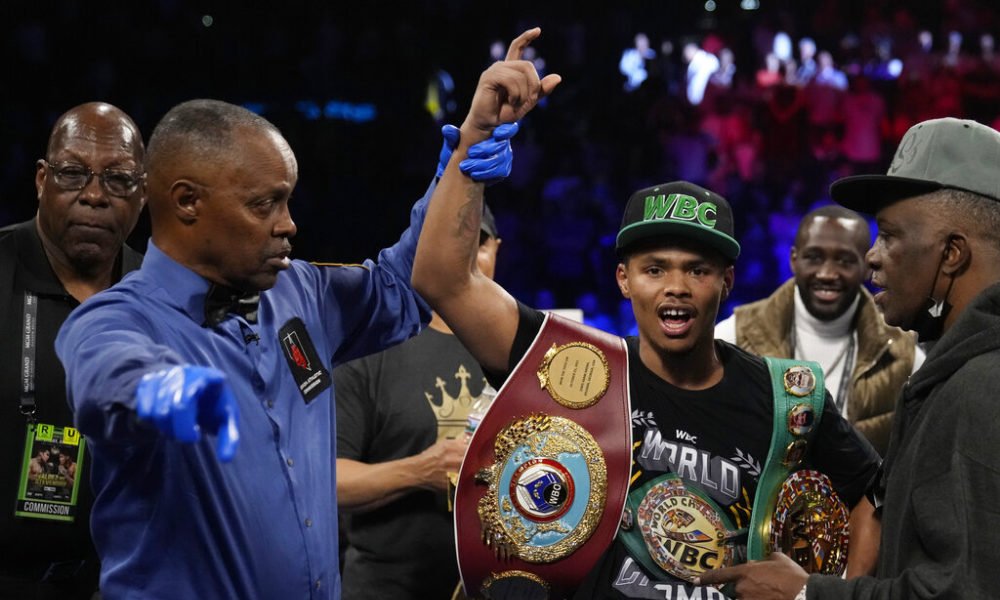 The American Shakur Stevenson unanimously defeated the Mexican Oscar Valdez this Saturday in Las Vegas and unified the titles of the World Boxing Council and the World Organization in the super featherweights.

The American, who now leaves his record at 18-0 and maintains the WBO belt, snatched the WBC belt from the Mexican, who lost his undefeated record and left his balance at 30-1.

«He is a tough champion, but I prepared myself to beat him. I’m ready for anyone, I want all the belts,” Stevenson said after the match.

For his part, Valdez declared about his rival that «he has a very great boxing quality and today he was the best in the ring. He moves very well, he is a champion. He has speed, he is a great boxer ».

– Far Superior Stevenson –
From the beginning the American showed why he is one of the best pound for pound today.

Stevenson took a slight advantage in the first two rounds with an effective jab that was hammering to keep distance against an opponent who was looking at all costs to enter the melee.

The Mexican tried to force the fight further in the third round with a couple of good innings, but the American kept taking advantage of his longer reach with his jab.

Stevenson’s left straight also began to wreak havoc from the fourth inning when the Mexican showed his injured face with a swollen right cheekbone.

The Mexican, who showed a small cut on his cheekbone, visited the canvas in the sixth caused by a blow from the American.

In the ninth, Stevenson got comfortable in the fight again as he landed hard in the soft zones with his hooks to continue to take advantage on the scorecards.

You can also read:  Wilder vs Fury, the expected rematch in heavyweights

In the eleventh, Stevenson continued to punish the Mexican, who had already received several left straights, which entered quite effectively.

Stevenson was confident that a victory this Saturday over Valdez would allow him to get into the ranking of the 10 best pound for pound in the world, knowing that this kind of fight, between undefeated champions, are the ones that make him climb the ladder with much greater solidity.

Stevenson was a bantamweight silver medalist at the 2016 Rio Games.

The boxer from Newart (New Jersey) won the WBO super featherweight title in October by defeating his compatriot Jamel Herring by technical knockout in the tenth round. That brilliant triumph made him one of the great jewels of American boxing.

On the other hand, a two-time Olympian with Mexico (Beijing-2008 and London-2012), Valdez had won the WBC title by knocking out his compatriot Miguel Berchelt in February 2021.

You can also read:  Joana Pastrana: "I'm better than ever"

Later, in September, he defended the crown with a points victory against the Brazilian Robson Conceiçao, Olympic lightweight champion in Rio-2016. That fight was surrounded by controversy since, days before it was held, Valdez tested positive for phentermine, a prohibited stimulant.

Then the WBC and the Arizona Yaqui Athletic Commission, which was overseeing the fight in the city of Tucson, allowed him to box on the grounds that the substance did not give him any competitive advantage.

On the Saturday card in Las Vegas, the fights between Mohammad Ali’s grandson, Nico Ali Walsh (5-0 and 4 KOs), who won with a spectacular knockout in the first against Alejandro Ibarra (7-1) were also held. in the medium ones.

In co-main event, American Deyshawn Davis (5-0 and 4 KOs) beat Mexican Esteban Sánchez (18-2 and 8 KOs) by knockouts in the sixth in the lightweight category. (AFP)