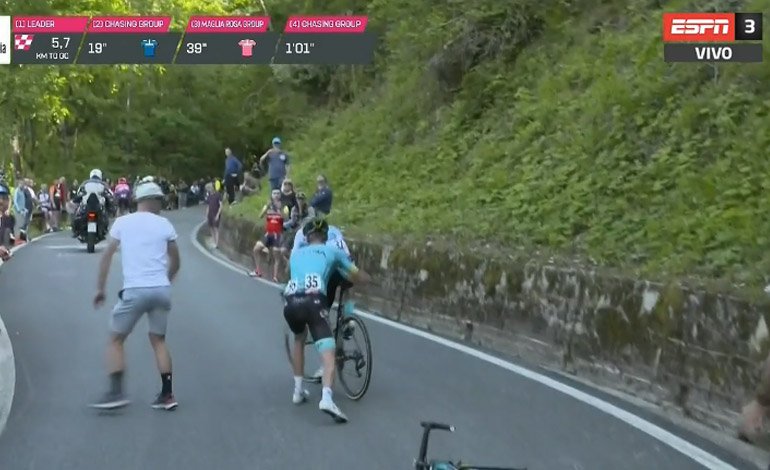 Colombian cyclist Miguel Ángel ‘Supermán’ López (Astana), the best youngster’s white jersey at the Giro d’Italia, hit a spectator who would have made him fall off his bike at the end of the 20th stage at Monte Avena.

In the television images, López, very angry, twice hits the viewer, who is on the ground. The incident occurred in the first ramps of Monte Avena, about 6 kilometers from the finish line.

«The fans have to have a little more respect. I’m sorry for what happened, it was pure adrenaline, “said” Superman “after the incident.

The Colombian also had to wait for a suitable bicycle to resume his march and crossed the finish line in 18th place, 1:49 behind the winner of the day, his Spanish teammate Pello Bilbao.

You can also read:  Dakar rally could return to Africa

‘Superman’ did not lose places in the general classification and remains sixth, but gave up time with respect to his pursuers, especially with the Russian Pavel Sivakov, also a candidate for the white jersey.

“I regret not having had a chance to fight for victory. I was feeling very well. I am wearing the white jersey for the second year in a row and I hope to be able to defend it (in Sunday’s time trial). But he had come here with other ambitions, “added López, who was at least consoled by the victory of his teammate Bilbao.

The indiscipline of the fans, who put cyclists in danger, was again produced in the penultimate ascent of the day, at the Croce d’Aune. A spectator pushed the Slovenian Primoz Roglic for a fortnight, which he let him do.

You can also read:  Rossi: "In Argentina I have a lot of fans"

At the end of the stage, Roglic received a 10-second penalty and is now in fourth place overall, 3:16 behind the leader and pink jersey, Ecuadorian Richard Carapaz, and 23 seconds behind third place. the Spaniard Mikel Landa.