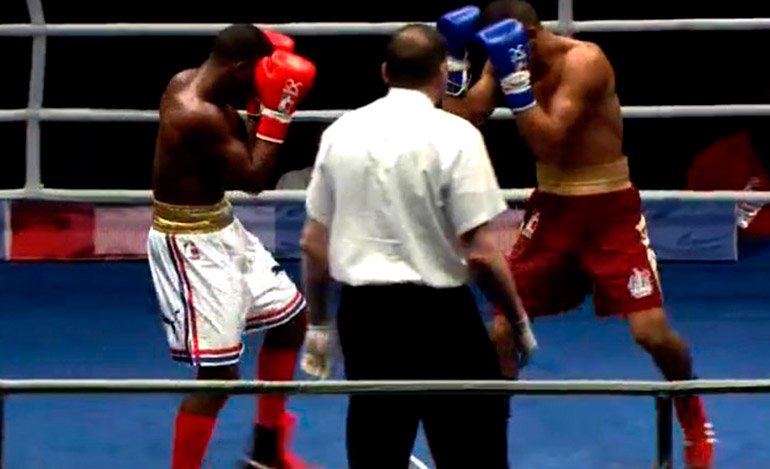 The boxers of the Domadores de Cuba team defeated their opponents Caciques de Venezuela 5-0 in the first poster of the América group in the start of the VII World Boxing Series (WSB, acronym in English) held at the Ciudad Deportiva coliseum from Havana.
The superiority of the technical level of the Cuban fighters, who hold the crown of the previous edition of the World Series, was the main factor that marked their debut against the Venezuelans.
From the first fight of the night, that of the 49 kilogram division, Joahnys Argilagos, world starter in Doha and bronze in the 2016 Rio de Janeiro Olympics, imposed the island’s boxing style on his opponent Jefferson Blanco.
The 20-year-old light fly Argilagos, an extremely technical boxer with more precision and defense, embedded his straight forehand more than once in the face of the Venezuelan striker whom he won the fight with an overwhelming 3-0 vote by the judges.
In the second duel, of 56 kg, the representative of the Tamers, Javier Ibáñez, punished Yoni Blanco, from the Caciques, from the beginning to the last assault.
The island fighter relied on his speed to knock down his opponent’s guard, worked with left hooks and was focused and quick to obtain his second victory in these World Series.
A public euphoric by the performance of the premises chanted “throw it, throw it (to the canvas)”, but the Venezuelan remained until the end enduring the barrage of blows that the local gave him, who finally won by unanimous decision.
The third match of the night faced the Cuban Andy Cruz, with a magnificent physical form, the Venezuelan Yoelvis Hernández.
More precise and accurate in the attack, Cruz used his short right to the fullest and managed to achieve victory comfortably in the 64 kilogram division, one of the strongest in the Cuban formation.
Rio Olympic champion Arlen López excelled in the 75-kilo crash with the effectiveness and power of his blows against the Venezuelan Keiber González, who left many gaps that allowed the Cuban’s blows to enter.
With his short left hooks, López achieved the maximum score to crown the fourth success of the Tamers squad in this first outing of the team in the seventh edition of the world competition.
The heavyweight fight (91 kilograms), the last scheduled, closed with a flourish for the Cubans, when boxer Erislandy Savón broke the record for the shortest fight on this lineup.
Just a few minutes after the first episode, Savón threw his Venezuelan opponent Ronald González on the canvas with a blow that apparently only grazed his head but resulted in the surprising outcome of a technical KO and left the Cuban’s undefeated in these Series intact.
The next top of the Cubans is scheduled against the Condors of Argentina, on the 17th of this month in this same scenario.
The qualifying phase of the WSB will run until April 22 and then teams A, B and C, by geographical regions America, Europe and Asia, will advance directly towards the quarterfinals with the first two places in each group.
The semifinal bouts are scheduled from June 2 to 9 and from July 23 to July 1, the lawsuits that will define the title will take place. EFE

You can also read:  Three Cubans finalists in the Boxing World Cup