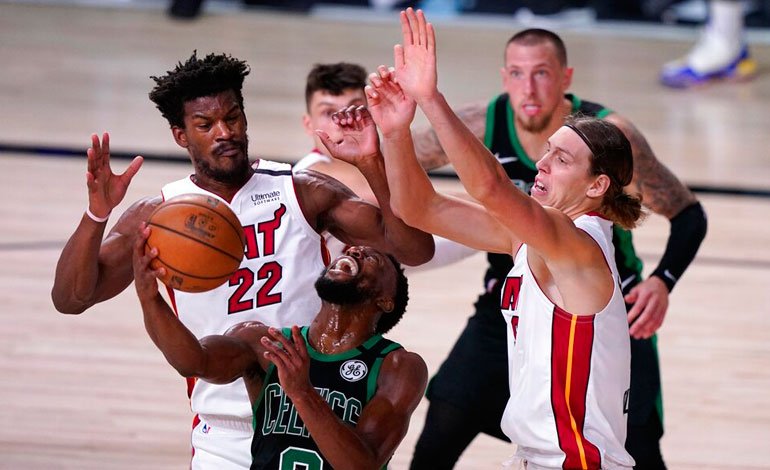 Led by their young figures Jayson Tatum (25 points) and Jaylen Brown (26), the Boston Celtics defeated the Miami Heat 117-106 and reduced the deficit to 2-1 in the NBA Eastern conference final.

After being unhinged and internally arguing in Thursday’s loss, this win gives Boston a break by avoiding a 3-0 deficit that no team has overcome in history.

The Celtics, who recovered Gordon Hayward, this time surpassed the fierce Heat on the Disney World court (Orlando) and dominated the scoreboard from the beginning to the final stretch, in which they managed to seal the victory despite a last acceleration of the Heat.

«This is a very special group, a very good group. The first time we were pushed to have more emotions, that they challenged us, we improved. That’s encouraging, ”Celtics coach Brad Stevens said, asked about discussions in the locker room Thursday.

To be honest, I didn’t sleep much in the last 48 hours. I was so eager to go back and play basketball (…) I’m happy to be a part of this team and this organization, and proud of how we responded, ”said Jaylen Brown.

You can also read:  Kobe Bryant and his daughter Gianna were buried in a private ceremony

In the Heat, pivot Bam Adebayo (27 points, 16 rebounds, 3 steals and 2 blocks) and rookie guard Tyler Herro (22 points and 4 triples) shone, while his figure Jimmy Butler had a discreet night with 17 points and 8 bounces.

Four minutes into the game, coach Stevens introduced forward Gordon Hayward, who had not yet made his playoff debut due to a right ankle injury that left him a month out and had to be treated. outside of Disney World.

The 30-year-old Hayward finished with 6 points, 5 rebounds and 4 assists in 31 minutes on the court, more than Stevens expected to use him.

You can also read:  Mitchell partied in the playoffs as Utah beat Clippers

“It felt a little weird to be back out there,” said the All-Star forward. “It was fun being with the team again. I tried to impact the team where I could. I’m very tired now, my ankle is in a lot of pain but we got the win.

Hayward, whose partner is close to giving birth, said he has agreed with her that he will not return from Disney World even if the birth of their child is to be missed.

“I think (Hayward) did what he has done all year. He didn’t throw that much, but he’s a stabilizing force for our team, ”Stevens acknowledged. “It makes us better, that’s for sure.”

The Celtics outscored the Heat 62-50 in the first half, with Jaylen Brown setting the tone for defense and Tatum culminating easy transitions on offense.

Rookie Tyler Herro was key to keeping Miami in the game with 16 points in the second quarter alone, including his 4 3-pointers. The Celtics hit the gas in the third quarter, getting leads of up to 19 points (81-62).

You can also read:  Harden with another gala night in the NBA, LeBron also shines

“We didn’t play hard enough, nor did we do anything we set out to do,” lamented Jimmy Butler. “Now we will see what we are made of.”

As in the two previous games, the Heat rallied back down the stretch, placing only 5 points (109-104) with 55 seconds to go, but this time the Celtics kept a cool head and sealed the win by being effective in free throws.

“We have to learn to close the games a little better,” acknowledged Jaylen Brown.

Both teams will now have a longer break than usual until Game 4, which will take place on Wednesday at Disney World.

The Western conference final, meanwhile, will resume on Sunday between the Denver Nuggets and the Los Angeles Lakers, who have a 1-0 lead. AFP (HN)