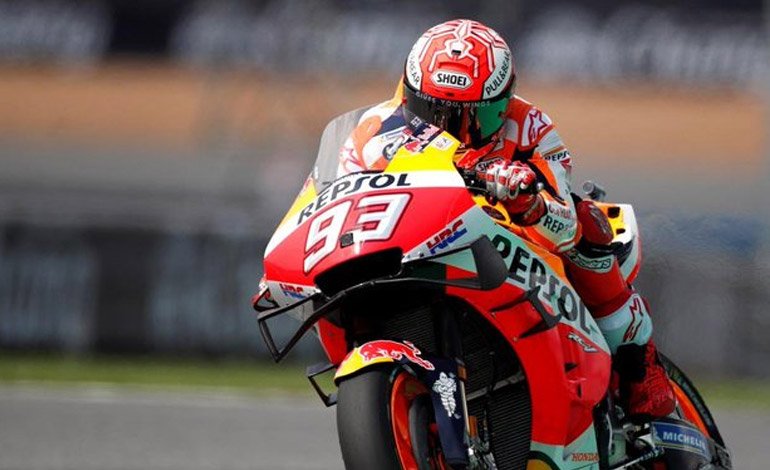 After the MotoGP race in Qatar, canceled on Sunday by the coronavirus epidemic, it was the turn of the Thai Grand Prix, which has been postponed to a date to be determined. Two decisions that alter the start of the Motorcycle World Championship, the last sporting competition affected by the new virus.

“First of all we must focus on the pandemic. Today we have to postpone the race until further notice, ”said Deputy Prime Minister Anutin Charnvirakul, who is also Minister of Health. “It is for the good of the country and the participants.”

“The Thai government has made it known that it will not be possible to organize the GP on its original date,” explained the organization of the test.

– ‘Another date is evaluated’ –

“It is currently being evaluated whether another date is possible to organize the race later in the season,” he added.

This announcement comes a day after the cancellation of the Qatar MotoGP GP, the first race of the season, which was to take place on March 8. The Thai GP was to be held on March 22 at the Buriram circuit (center).

The next scheduled MotoGP event is now the Grand Prix of the Americas on April 5, near Austin (United States), so the championship will begin with what was to be its third race.

The announcement to postpone the GP of Thailand was made “due to restrictions on the movement of people from Italy, among other countries,” the organization said.

Several MotoGP championship teams are Italian, such as Ducati and Aprilia, as are many riders such as Andrea Dovizioso, Danilo Petrucci and Francesco Bagnaia, who compete for Ducati, or Valentino Rossi and Franco Morbidelli (Yamaha).

Italy is the European country most affected by the new coronavirus with 34 deaths and more than 1,600 confirmed cases.

You can also read:  Ecclestone will answer for an alleged bribery case

The Moto2 and Moto3 teams and riders, in Qatar since last week for the tests, are not affected by the cancellation in the emirate and will compete.

Other motorsports events have already been canceled or postponed due to COVID-19, such as the Formula 1 Chinese Grand Prix scheduled for April 19 in Shanghai, and a Formula E (electric single-seater) championship race scheduled for April 21. March in Sanya, on the Chinese island of Hainan.

Some 3,000 people have died worldwide and nearly 86,000 have been infected since the virus was first detected in the Chinese city of Wuhan late last year. Of those, 79,000 cases and 2,835 deaths correspond to China.

Asked by AFP on Sunday, a spokesman for Formula 1, whose championship begins on March 15 in Australia, noted that the situation “has not changed” and that the only race affected at the moment is the Chinese GP, although the organization “closely monitors” developments.

You can also read:  Ferrari shows Mercedes it can battle it out

Beyond motorsports, the entire world sports calendar is suffering the consequences of the spread of the coronavirus. In Italy, championship matches have already been postponed and concern is growing about the European Championship, from June 12 to July 12 in 12 countries on the continent.

This issue will be dealt with from Tuesday in Amsterdam in a UEFA executive committee. The tournament, which starts in 100 days, opens with an Italy-Turkey on June 12 in Rome.

“At the moment it is not necessary to change what is foreseen in the calendar,” said UEFA.

On the Olympic Games, in less than five months in Tokyo (July 24-August 9), IOC President Thomas Bach said on Friday that his institution is “totally determined” to celebrate them.

Between Tuesday and Wednesday the IOC meets in Lausanne with the coronavirus as the main topic to be discussed. AFP