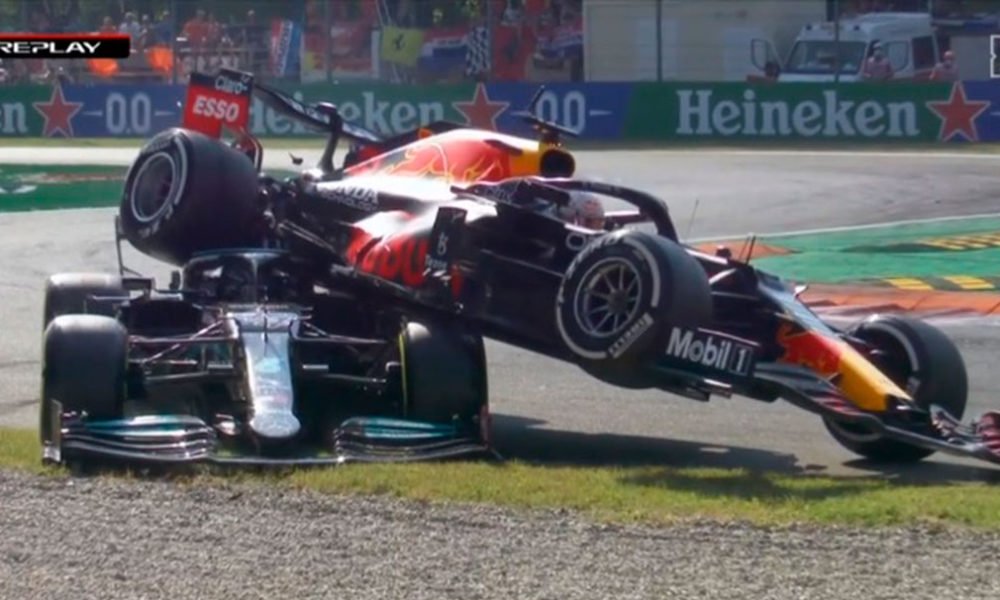 Lewis Hamilton came into the world on January 7, 1985 in Stevenage, in England, but had another birth: on September 12, 2021 in Monza. The seven-time world champion saved his life thanks to the safety measures of his Mercedes in the controversial touch he had with Max Verstappen in the first chicane where they both left the Italian Grand Prix where Daniel Ricciardo prevailed, in the return to the triumph of McLaren after nine years.
It was on the 26th turn that the Englishman stopped to change tires. He returned to the track and met the Dutchman, who when he reached the chicane went around the corner to the right and stretched the turning radius. The two pushed themselves to the maximum and their cars touched, they went to the leca bed where the Red Bull mounted on the Mercedes.
In replay, super slow motion shows part of Verstappen’s car chassis breaking over the Halo of the Englishman’s car, which also prevented the right rear wheel from hitting his head. It should be noted that the weight of the car (749 kilos) must be added that of the impact, but luckily it was in a place of low speed when leaving a chicane. There were no physical consequences for the runners.
The image is impressive of how Hamilton himself turns his head. While the Halo is the key to its preservation, so is the helmet made of carbon fiber (a very resistant material) and the HANS system, which is used to protect the head and neck, in impacts and decelerations.
The touch between Max Verstappen and Lewis Hamilton, who saved his life thanks to the safety of his Mercedes
“He didn’t leave me room,” Verstappen wielded. The two got off their monoposts, did not look at each other or say a word. While Hamilton lost a lot with this incident as he had been doing a good race where he started on hard tires, betting on a single stop and thanks to a successful strategy from Mercedes.
The Halo is a safety tool created and developed as a result of the fatal accident of the Frenchman Jules Bianchi in the 2014 Japanese GP, where his car got lost and collided with a tow truck that was removing the car of the German Adrian Sutil.
This variant was introduced in 2018 and was initially very controversial because it affected the aesthetics of the cars. However, since its inception it has been key to preserving the integrity of the pilots. For example, in an accident that took place that season at the start at Spa-Francorchamps, in the Belgian GP, ​​when Charles Leclerc saved his life when Fernando Alonso’s McLaren passed overhead and the Halo avoided a blow to the head.
Another important example was the terrible crash that Romain Grosjean had at the end of last year in Bahrain, when he hit the guardrail, his Haas caught fire and broke in two, but the element that did not twist its structure was the Halo, which passed through defense and saved the life of the French, who also escaped the flames.
As happened with the touch between them in the British GP where Verstappen was left out and ended up in the medical center and with his car destroyed, what happened in Monza will bring a lot of controversy in these two weeks until the next race. The crossovers of statements have already begun and both demarcate responsibility for the other.
The two runners were summoned to testify by the stewards and it will be necessary to see if any action is taken. There are eight dates left to finish the season and as the competitions go by, the tension on the track grows and once again a maneuver ended badly.
With the abandonment of Verstappen and Hamilton the championship has it in front of the Dutch with five points of advantage over the English. Two-thirds of the season was completed and eight dates remain and the next will be on September 26 with the Russian Grand Prix at the Sochi Circuit.

You can also read:  Alfa Romeo returns to Formula 1 with Sauber