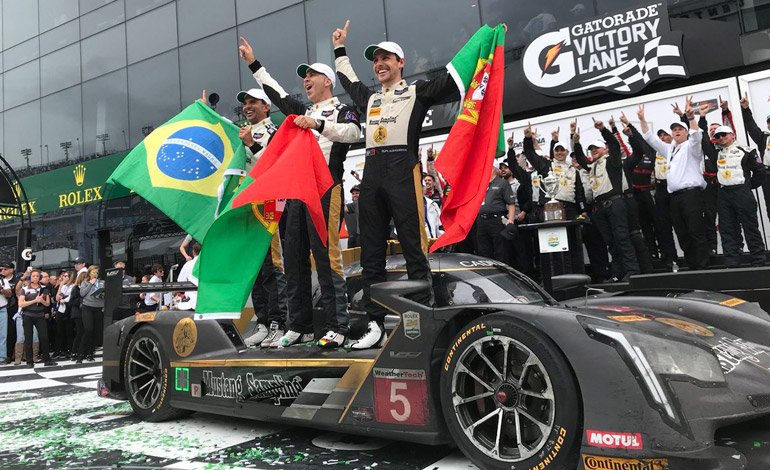 Brazilian Christian Fitipaldi and Portuguese Joao Barbosa and Filipe Alburquerque won the 24 Hours of Daytona this Sunday in a very clean race in which Fernando Alonso’s Ligier finished thirty-eighth after half a dozen breakdowns.
This is the third victory at Daytona for Barbosa (2010 and 2014) and Fittipaldi (2004 and 2014) and the first for Albuquerque, who was in charge of crossing the finish line at the wheel of the Mustang Sampling team’s Cadillac, which he dominated from start to finish.
Despite setting the third fastest time in qualifying, they soon took the lead and were first through the eighteenth of the 24 hours of the event.
Only the Acuras commanded by the Brazilian Helio Castroneves and the Colombian Juan Pablo Montoya seemed like they could stand up to them, but a touch with the Cadillac number 31 of the first and a breakdown of the second took them away from the front. In the end they finished ninth and tenth, respectively.
The second classified were the drivers of the Cadillac prototype of the Whelen Engineering Racing team shared by the young Brazilian Felipe Nasr, Eric Curran, Stuart Middleton and Mike Conway.
This car arrived 1: 10.544 late, while the third prototype entered the finish line 21 seconds later after being driven there by Jonathan Bennett, Colin Braun, Loic Duval and Romain Dumas.
The Spanish did not have their weekend, with the exception of Antonio García, the only one who had won at Daytona in the prototype category and a class one.
The Madrilenian reached the finish line third in the GTLM division with his Corvette C7.R, which had set pole, only after the two Ford GTs.
But the attentions were on Alonso’s Ligier and his young teammates, 18-year-old Brits Lando Norris and Phil Hanson, who were thirty-eighth, or penultimate, of the prototype division.
Although the training and qualifying sessions (13th) were not very promising, the start of the race gave signs to the contrary and the two-time Formula One world champion came to lead the test by two laps in what was his debut in a race resistance.
But first a puncture from Hanson took four laps away, to which another 22 had to be added when Alonso broke one of the brake master cylinders, leaving him pitted 40 minutes and 22 laps behind.
That was the end of the race for them, which left a worse taste in their mouths after Alonso and Norris set one of the best race rhythms at night.
To complicate matters, Norris had a clutch problem when they were struggling to get close to the top-10, and then another brake failure with Alonso that took his Ligier to 20th place.
From that moment on, a nightmare for the young Norris, who will accompany Alonso at McLaren next season as a test driver, with several pit stops that left him penultimate in his class.
But Alonso said at a press conference to leave satisfied because now he knows much better how to drive a prototype and he knows that he can keep up with the best, and all with his sights set on a future participation in the 24 Hours of Le Mans.
But he regretted the “missed opportunity” and considered that they could have reached the podium, as the other Ligier of the team finished fourth being slower than he and his team were driving.
The problems were mechanical, because it was a clean race, without major accidents and with little presence of the safety car, which allowed the cars to fly.
Thus, the winning Cadillac broke two Daytona International Speedway records, the highest number of laps completed (808) and the longest total distance traveled (2,876.48 miles or 4,629.23 kilometers), marks dating from 1992 and 1982, respectively.
The same type of problems had the Spanish Dani Juncadella, who was fifth when he suffered a puncture that damaged part of his Oreca LMP2.
This incident, accompanied by a later one, relegated him to fighting to enter the top 10, but he had to settle for fifteenth position.
The fourth Spaniard in contention, Miguel Molina, entered the finish line just behind Alonso’s Ligier, in thirty-ninth position.
The Porsche 488 GT3 that he shared with the Mexicans Martín Fuentes, Ricardo Pérez de Lara and Santiago Creel and the Irishman Matt Griffin began the test in the lead, but the engine of his car began to burn and when the mechanics repaired it they were already lost in the platoon queue. EFE
You can also read:  Brazil remembers three-time champion Senna on the 22nd anniversary of his death