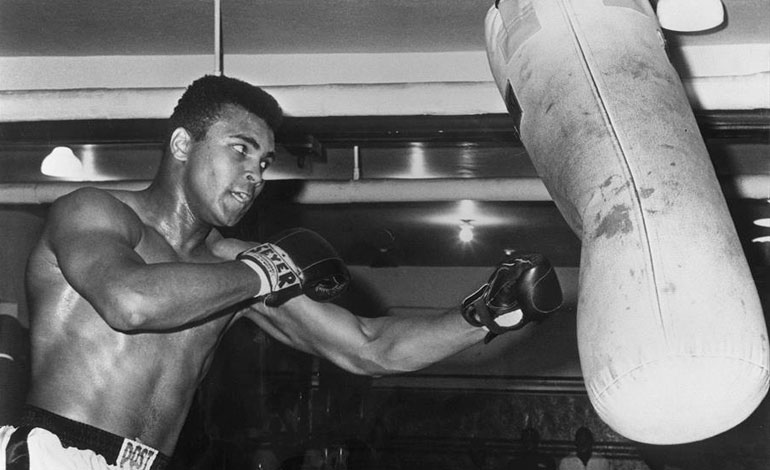 ‘I have no problems with the Viet Cong. No Viet Cong ever called me a (black) nigger. ‘ This phrase was enough for Muhammad Ali to be condemned almost to oblivion on April 28, 1967, the day his boxing career almost came to an end.

This Tuesday marks the exact 53 years since Ali rebelled by refusing to step forward to be recruited by his country, the United States, and fulfill military service in the Vietnam War.

But the story of rebellion and bravery of Ali, baptized with the name Cassius Clay, began from his birth on January 17, 1942 in Louisville (Kentucky), where racial confrontations were the daily bread.

As a child he learned to fight to overcome injustice, prejudice and racial discrimination. Also, these were the times of the Muslim boom in the African-American community.

The origin of his love of boxing was born from a robbery. They assaulted him to take away his bicycle when he was 12 years old and the police officer who received his complaint, who was also a coach, advised him to learn to fight since that was not going to be the first offense he would face.

Six weeks later Clay won his first amateur match. And from then on his name began to be heard everywhere until he became ‘The Greatest’ (The Greatest).

His original name, Cassius Marcellus Clay, was given by his parents as a tribute to a white farmer who freed the forty slaves he inherited from his father. But the name Muhammad Ali made him a legend and catapulted him to stardom.

He won the light heavyweight title at the Olympic Games in Rome in 1960 and later, as a professional boxer, his career grew dramatically: 19 wins in 19 fights, 15 of them by knockout.

I’m the part you don’t recognize, but get used to me. Black, sure of myself, conceited, “he expressed with his characteristic verbiage, without any blush and without fear, just as the social activism to achieve racial equality in the United States began.

On February 25, 1964 in Miami, Clay defeated Sonny Liston by technical knockout in the sixth round and was crowned heavyweight champion of the World Boxing Association (WBA), the World Council (WBC) and the Athletic Commission. of New York (NYSAC).

But Clay, the fighter who famously made the phrase “float like a butterfly, sting like a bee” or “my hands can’t hit what my eyes can’t see,” surprised the world the day after winning his first world title with a of his controversial statements.

He announced that he had become “the Nation of Islam”, and that his new name was Muhammad Ali – which meant ‘the Beloved of God’ – because Cassius Clay, according to him, was a symbol of slavery.

From there, Ali defended the title nine times: from the rematch with Liston in May 1965 to the fight with Zora Folley in March 1967.

But the United States Government had other plans for him.

He demanded that the new sports idol, who generated passions and hatred, join the ranks of the army and fight in the Vietnam War, an action to which he refused.

Ali had been putting off his enlistment on appeals and his stance against the war was frowned upon in a society that labeled him a traitor, unpatriotic and that saw him as a black who reigned in a sport invented by whites.

On April 28, 1967, the Supreme Court refused to grant him a further postponement, and Ali reported to the Army training center in Houston without knowing what to expect.

The enlistment ceremony was completed by stepping forward when the officer spoke his name, but Ali did not give it and stayed in the same place and in silence.

As punishment for refusing to go to the front lines, in addition to taking away his titles, Ali was sentenced to five years in prison and banned from boxing for three years by taking away his license.

Three years, two months and three days after being crowned champion, Ali, 25, was ostracized. The verdict divided society between supporters and detractors of ‘El Más Grande’.

In his answer to why he was not going to Vietnam he said: “I am not going to fight a battle in which I do not believe, it is something unfair. I have no problem with the Vietcong. No Viet Cong ever called me a (black) nigger. ‘

During the time he was in prison, everything changed. There were protests against the Vietnam War and the opinion of the American society changed, which began to understand Ali and then made him an idol and an influential figure for a whole generation.

In September 1970, after three years and five months in prison, a federal judge in Texas revoked Ali’s sanction as “arbitrary and unreasonable” and the same commission that took away his titles again granted him a license to box. .

Ali returned to the ring at the age of 28 and a record of 29 wins with 22 knockouts. And he also came back more talkative. “I am the fastest, the toughest and the cutest,” he repeated over and over again to the applause of an audience that loved him.

You can also read:  Kazakh Golovkin is named fighter of the month by the World Boxing Council

He did not care how many years he lived in prison, Ali stepped into the ring to regain what was his. And yes he did.

He starred in memorable fights such as his triumph over Argentine Oscar ‘Ringo’ Bonavena in 1970 in New York, or the victory over George Foreman on October 30, 1974, in Zaire, in the so-called The Rumble in the Jungle. ) where he regained the WBA and WBC world titles.

And not to mention Thrilla in Manila (Suspense in Manila), the third and last fight against Joe Frazier for the world heavyweight championship, to define the champion of champions in the Philippines, on October 1, 1975, at 10:45 a.m. the morning already over 40 degrees.

That same year, in his autobiography, Ali said that after returning to Louisville he threw his gold medal from an Ohio River bridge out of anger when he was denied entry to a restaurant because he was black. At the 1996 Atlanta Olympics, he received a replacement gold medal.

Ali, also called ‘the Champion of the people’, had a record of 56 wins with 37 knockouts, lost five times and won three world heavyweight championships.