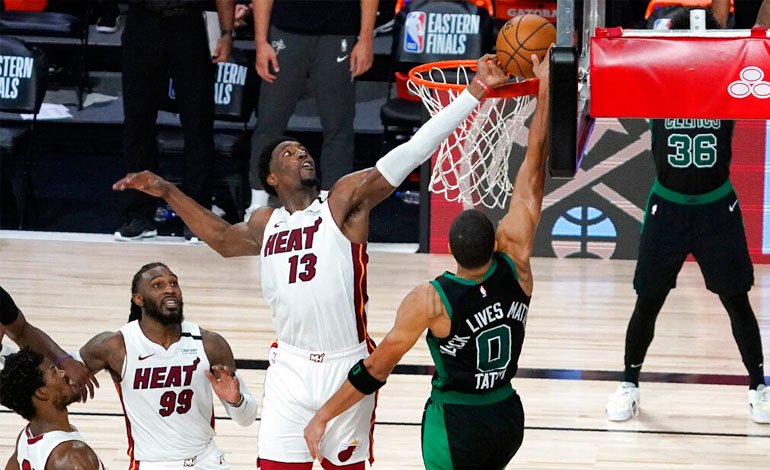 With another comeback, the fierce Miami Heat beat the Boston Celtics 106-101 and went ahead 2-0 in the NBA Eastern Conference final, plunging their rival into frustration and nervousness.

Slovenian Goran Dragic, with 25 points, and center Bam Adebayo, with 21 points and 10 rebounds, boosted the Heat in the most difficult moments, especially in a brilliant third quarter in which they turned the scoreboard with a partial of 37-17.

The young figures of the Celtics, Jayson Tatum (21 points) and Jaylen Brown (21), had the support of base Kemba Walker (23) on the field of Disney World (Orlando) on Thursday but were again unable to ensure victory in a tight ending.

Boston went into halftime with a partial lead of 60-47, with its all-star trio setting the pace of the game with their speed and outside shooting effectiveness.

You can also read:  Cavaliers sink the Bulls

The Heat could not find the way to their figures, Jimmy Butler (14 points) and Adebayo, and resisted based on the triples of Duncan Robinson (18 points with 6 triples) and Crowder (12 and 3).

But, as happened in the first game, the Heat accelerated and reversed the Celtics’ lead, powerless against the force in the paint of Adebayo, who scored 15 points in the third quarter.

We fell apart. We didn’t play well and they did a good job. We are not going to beat this team if we do not connect both sides of the court, “demanded Brad Stevens, coach of Boston.

“We like to make it difficult for ourselves,” said a satisfied Jimmy Butler.

– Tension on the Celtics –

Intimidated by the push of the Heat, the young figures of the Celtics rushed in attack (20 lost balls in the whole game by 9 of their rival) but still managed to turn the scoreboard and put themselves ahead 94-89 again with four minutes remaining.

You can also read:  Leonard gives his best version with Clippers; Jazz reach 10 wins in a row

Down the stretch, however, Miami got a cooler head again and took the win thanks to a decisive triple and basket by Goran Dragic and two key steals by Butler on defense.

The Celtics players ended the clash frustrated, with reports of shouting and arguments between them that could be heard from outside the locker room.

«What happens in the dressing room has to stay there (…) It is a team sport. We’re not supposed to be happy to be down 0-2, ”Jayson Tatum said afterward. “Nothing out of the ordinary. We talk about the game. It’s fine”.

“The guys were very emotional after a tough game, a tough loss,” coach Stevens said. “Right now they are a better team and we have to fight to get back into the series.”

The Celtics need a victory in Game 3 on Saturday to avoid a 3-0 deficit that no team has been able to overcome in history.

The Heat have added 10 victories and a single loss since the playoffs began at Disney World, in which they eliminated Giannis Antetokounmpo’s Milwaukee Bucks, the best team in the regular phase, by a clear 4-1 in the previous round.

The Western conference final, meanwhile, will begin on Friday between the Los Angeles Lakers and the surprising Denver Nuggets, who on Tuesday eliminated the favorites Los Angeles Clippers. AFP (HN)