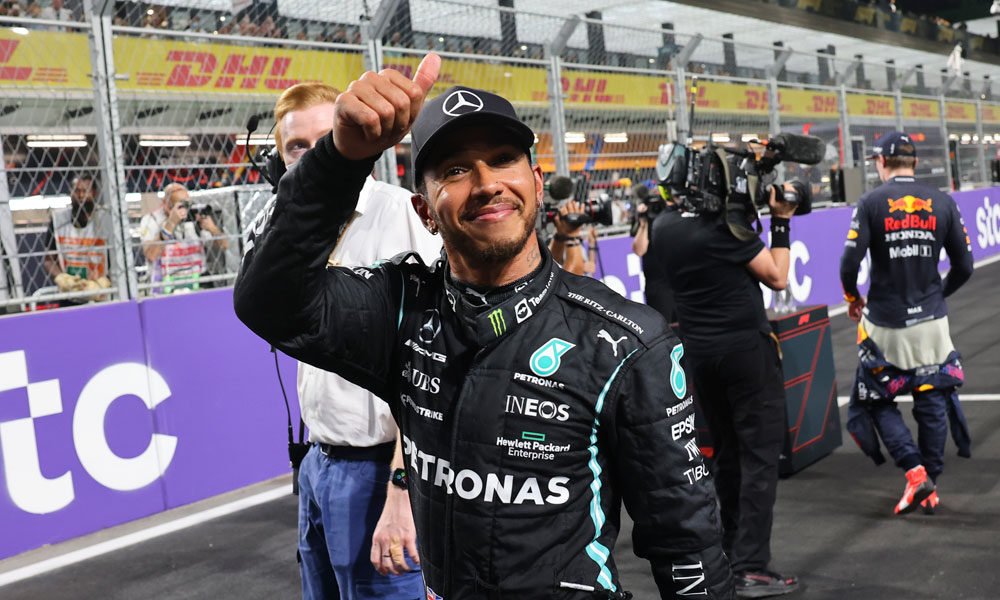 The sporting life of British driver Lewis Hamilton has changed in just over five months. On December 12, 2021, with two laps to go at the Abu Dhabi Grand Prix, he was the leader, which meant beating Dutchman Max Verstappen in the fight for the Formula 1 title, reaching eight crowns and becoming the top winner. in the history of the most important motorsport series in the world.

However, at the end of the competition at Yas Marina it was the Red Bull driver who first saw the checkered flag and inaugurated his showcase at the Great Circus, Hamilton congratulated him, but was annoyed by the decisions made by the race director on that date; A few months later, Michael Masi left his post, while the Englishman pondered his future in silence, given the concern in his team, Mercedes.

On the day of the team’s 2022 car unveiling, Lewis appeared alongside his new teammate and compatriot, George Russell, to put an end to speculation about his retirement and said he was ready to reclaim the throne after what happened at the end of the season. previous; However, during the winter they also changed the rules of F1, with the aim of offering greater parity on the grid and the squad that suffered the most was the German, which since training no longer looked so powerful.

Although he was third in the debut in Bahrain, with the passing of the calendar number 44 has had problems with the car, he was tenth in Saudi Arabia, fourth in Australia, 13 in Emilia Romagna, sixth in Miami, which caused him to resigned, “even being in these positions is still running, it just changes your perspective”, while in Spain after a great comeback he was 5th.

Although his rivals are still waiting for a possible return of the Briton to the fight for the title that for now is only between the Monegasque Charles Leclerc of Ferrari and Verstappen, Lewis is sixth in the championship, behind the two drivers of the Prancing Horse, the of Red Bull and his partner, Russell.

You can also read:  Formula 1 canceled Turkish Grand Prix and modified its calendar

This puts at risk a couple of Hamilton’s feats: in his previous 15 campaigns in the top flight, he always finished in the top five of the table and in each one he added at least one win, which has not happened with almost a third part of 2022 elapsed.

Always in the elite

The seven-time champion has a unique relationship with the Great Circus and since his landing he left a mark: it took just six Grand Prix to win for the first time and in his debut year he started the last date as leader; only mismanagement of the situation between him and his McLaren teammate, Spaniard Fernando Alonso, prevented the Englishman’s crowning as a rookie and instead led to that of Finn Kimi Räikkönen at Ferrari in 2007.

The following year, without Alonso in the garage, he had his revenge and took the throne, with five victories included; for 2009, due to a major change in the rules, McLaren fell in the standings and the defending monarch could only finish fifth, despite winning Hungary and Singapore.

The following campaign marked the start of Red Bull’s era of dominance and Hamilton finished fourth, after winning in Turkey, Canada and Belgium, the following year he dropped to fifth, but conquered China, Germany and Abu Dhabi; his stage in the Woking team came to an end after 2012, when he was fourth, taking the biggest trophy in Canada, Hungary, Italy and the United States.

In 2013 he joined the Mercedes project and after a difficult start, he achieved his only success in Hungary (his calendar with the fewest wins so far), to close the championship in fourth place, behind the Red Bulls and Alonso. , who was already at Ferrari.

You can also read:  Gutiérrez: "I want to be the leader of the team"

However, a new revolution in the rules of the series this time benefited Hamilton, who together with his squad began an era of hegemony since 2014, which included six drivers’ titles for him and two second places (in 2016 before the coronation of his fellow Silver Arrows German Nico Rosberg and in 2021, when Verstappen snatched the crown from him on the last lap of Abu Dhabi).

A resume in which, in addition to the seven titles, he boasts 103 victories, the most in history (12 more than the German Michael Schumacher) and the same number of pole positions, in addition to the impressive figure of 4,211.5 points, more than a thousand per ahead of the German Sebastian Vettel and a sign that Lewis, even in his most difficult moments, has been able to be among the top five, which is now at risk.

This situation of finishing every season in the Top 5 is the biggest doubt about the immediate future of Hamilton, with a Mercedes that is behind the two Ferrari cars and those of Red Bull, so at this time his maximum aspiration would be to finish as the best of the rest on the grid.

His main rival to achieve this is his teammate Russell, who after the first six dates is fourth in the standings, even ahead of the Spanish Carlos Sainz, from Ferrari, thanks to two third parties (Australia and Spain), two fourths and two fifths, for a figure of 74 units, 28 more than the seven-time champion.

The newcomer respected the hierarchy at first, but already at the Miami Grand Prix he dared to overtake his teammate to finish the race ahead of him, so that warning could last for the rest of the season and even be the first teammate to pass Lewis since the Rosberg title.

You can also read:  Pirelli performs a test at Fiorano with Ferrari

Another opponent for the Englishman for that fifth place is the British Lando Norris, from McLaren (today 7th), since despite the fact that the Woking car has not performed as expected, the young driver was able to get on the podium in Emilia Romagna and accumulates 39 units, seven less than the leader of triumphs in the history of the serial.

The last name that seems to be in that dispute to be the best of the rest is his friend and former teammate, the Finn Valtteri Bottas, who after being relieved at Mercedes by Russell found a seat at Alfa Romeo, a team that has experimented with Ferrari engines a growth that the veteran has taken advantage of to be eighth, adding 38 points after six competitions.

These three protagonists are the ones that can cause Lewis to visit unknown territory for him, that of sixth place (or worse) at the end of a season, with consequences if it is Russell for what it would mean in the garage, if it is Norris for a generational change in F1 or Bottas, which would show that his bet was a winner.

However, with most of the campaign still to play, it is possible to expect a reaction from Mercedes, perhaps not to fight for the titles, but for the wins and with the talent and experience of a seven-time champion, to claim that fifth place in the table and win a few wins to keep his streaks safe and his category in the series. (ESPNSPORTS)