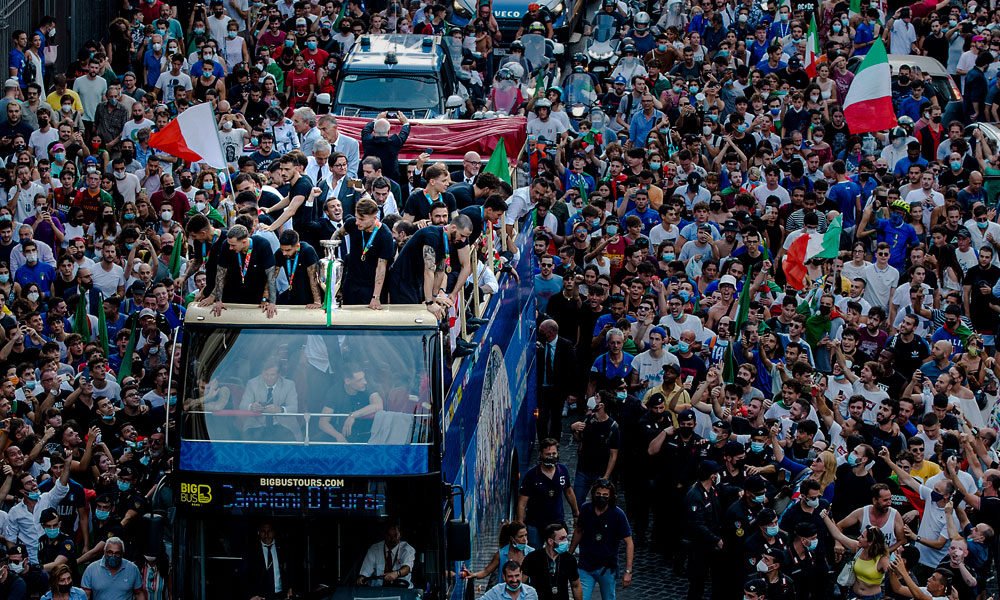 Italy celebrated the triumphant return of their ‘Nazionale’, European soccer champion on Sunday against England in London, in a victorious Euro Cup that acts as balm for the country after a painful period.

The ‘Nazionale’ players took a mass bath from a bus in which they made a triumphal tour of the capital Rome amid the cheers of thousands of Italians who invaded the streets.

“It’s coming to Rome”, shouted euphoric at the end of the final defender Leonardo Bonucci, scorer of the Italian tying goal and also scorer of the third penalty in the shoot-out in a suffocating final at Wembley Stadium ( 1-1 in regulation time, 3-2 on penalties).

His teammate Giorgio Chiellini, captain of the ‘Azzurri’, was in charge of lifting the trophy to the London sky before presenting it to his fans this Monday morning when he left the plane in Rome, wearing a crown on his head.

Winger Leonardo Spinazzola, considered the unfortunate hero of this edition after suffering an Achilles tendon injury against Belgium in the quarterfinals, jumped the steps of the Alitalia plane and crossed the runway on crutches to the cheers of the media. communication and airport staff taking pictures.

You can also read:  America beats Tigres and is the leader of the MX league

The ‘Azzurri’ then went to a hotel to rest for a few hours, before being received by the president of Italy, Sergio Mattarella, 79, who attended London to support them.

Chiellini took the opportunity to dedicate the victory to Davide Astori, a former Italian Fiorentina international, who died in 2018 at the age of 31 from a heart abnormality.

The selection was received before the presidency of the republic by several hundred enthusiastic people and kept at a distance by a police cordon. When the trophy was lifted, the crowd cheered for their heroes who posed for photos.

Before reaching the presidency, his bus, escorted by the police, was followed in the streets of the capital by a long entourage of motorcycles and vehicles, with pedestrians applauding as it passed.

The Italian Prime Minister, Mario Draghi, received the footballers and also the tennis player Matteo Berrettini, a finalist in the Wimbledon tournament, who in turn met with Mattarella.

In a Wembley with a majority of its own fans and a favorable scenario, England were favorites and Italy took advantage of it. “We heard day after day, from the game against Denmark, that the cup would return to London, home. I feel sorry for them, the cup is going to make a nice trip to Rome. It is for all Italians, all over the world, for them, for us ”, launched Bonucci.

You can also read:  UEFA will maintain rejection of the biennial World Cup

From the Eternal City to Palermo, from Milan to Naples, the Italians celebrated all night amid a concert of horns and a cloud of flares the first title of the ‘Nazionale’ since the World Cup-2006, their second European title after the achieved in 1968.

The image of the team, four times world champion (1934, 1938, 1982 and 2006), was seriously damaged by its absence in the 2018 World Cup in Russia, for which it failed to qualify. But the nightmare has been forgotten and coach Roberto Mancini’s Italy will be among the favorites for the 2022 World Cup next year in Qatar.

“It is a renaissance for Italian football,” said Bonucci excitedly.

It is also a major breath of joy for a country that has recorded more than 128,000 deaths since the start of the Covid-19 pandemic a year and a half ago.

You can also read:  AC Milan filed complaint about racism from Lazio fans

“We are delighted for the Italian people because they deserve it after such a difficult period,” said Mancini.

The former Inter Milan and Manchester City manager restored this dying team to its confidence, transforming it into an attractive, cheerful squad. Captain Chiellini and his teammates became true “Fratelli d’Italia” (Brothers of Italy), as that hymn that they sing at the top of their lungs before each game says.

“We have an exceptional group, we love each other, we know where we come from. Nobody believed in us, but here we are today ”, declared goalkeeper Gianluigi Donnarumma, decisive in London with two penalties saved in the shoot-out and voted best player of the tournament.

Bonucci pointed to that same sacred union to explain this success. “It’s amazing because day after day we never tire of spending time together. Normally you want something so long to end, but here we had that burning desire to continue together.

That desire will last a little longer, with intense celebrations in Italy. AFP (HN)