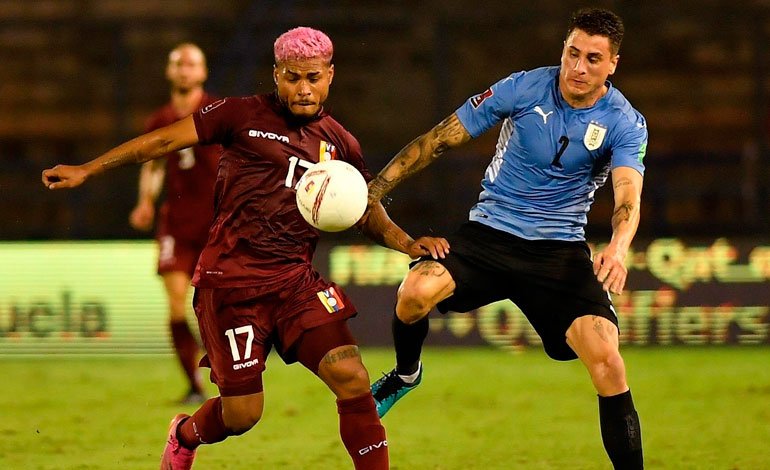 Luis Suárez was isolated and Uruguay had no choice but to settle this Tuesday with a 0-0 draw with Venezuela in Caracas, on the eighth day of the South American qualifying round for the Qatar-2022 World Cup.

The only goal cry of the game played at the Olympic Stadium of the Central University of Venezuela was heard in the 17th minute, released loudly by Josef Martínez, but the play was annulled by a handball from the local striker at the request of the VAR.

Oscar Tabárez’s team pressed towards the end of the match, but could not break the equality due to the security of goalkeeper Joel Graterol in a one-on-one with Matías Viña.

Uruguay now has 8 points in six games in a table led by Brazil with 15. Venezuela is left with 4 points along with Peru in eighth place.

THE DESIRE OF MARTINEZ

The coach of Venezuela, the Portuguese Jose Peseiro, shook up the starting eleven of the Vinotinto with a change of system, by lining up three central defenders with Alexander González and Roberto Rosales as lanes. The coach also gave ownership to Josef Martínez as 9.

Tabárez, on the other side, included the young Facundo Torres to accompany Luis Suárez along with Jonathan Rodríguez.

Martínez, back in the red wine team after a long absence due to problems with the previous coach, Rafael Dudamel, and a serious injury, was very active and opened the exchange of opportunities with a shot at the start of the game.

Suárez responded after 10 minutes, without being able to break Graterol’s goal.

You can also read:  Mancini summons Eurocopa champions for next duels

Martínez defined with quality after receiving in the area and the locals celebrated. The celebration, however, stopped short when the play was annulled by an attacker’s hand with the intervention of the video arbitration system.

Rómulo Otero and Jefferson Savarino began to play inside with the projections of González and Rosales by bands and to prowl the celestial area.

At the same time, Uruguay detected a weakness in the red wine ranks: Villanueva did not have a good afternoon-night.

Torres began to attack Villanueva again and again, who had serious problems with Peñarol’s promise. In any case, Venezuela calmly put up with these attempts.

On the brink of the break, the tireless Martínez headed dangerously, but the ball was lost over the crossbar.

You can also read:  Sergio Ramos' debut with PSG is scheduled for September

Tabárez began to move pieces after the break with the entry of Nahitan Nández and Matías Viña. Nicolás de la Cruz was the next man to come off the bench.

Problem: The sky blue team’s lack of offensive ideas, far from being cured, worsened even more.

And in minute 70, Venezuela had another good chance with Martínez, whose header, to Savarino’s center, went wide.

Uruguay had two great options: a header by José María Giménez in the 74th minute and a play by Viña, only against Graterol, but the goalkeeper was able to block.

Uruguay’s drought, in the end, continued. He has not been able to score in his last three pre-World Cup games, in which he has barely been able to win 2 points. AFP. (JL).