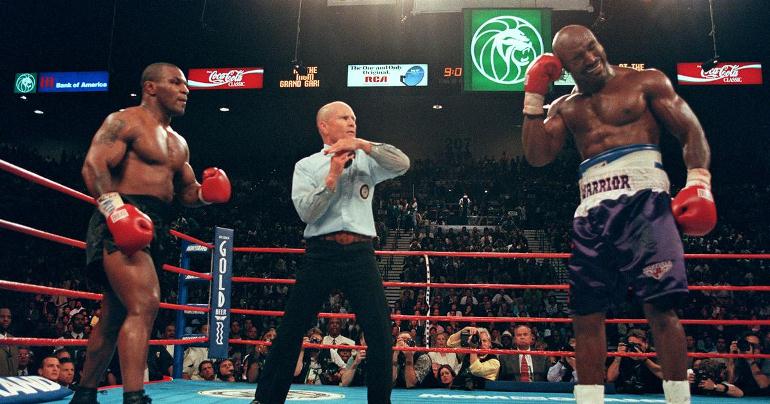 This year boxing would have a clash with two historic heavyweights and both world champions: Mike Tyson and Evander Holyfield would get back into a ring to face each other and complete a trilogy. Despite being an exhibition, the fight would be this year in Dubai (no date confirmed yet) and there would be a prize pool close to 300 million dollars.

In November Iron Mike returned to the ring in an exhibition against Roy Jones Jr. and was so excited that he raised the possibility of another lawsuit, which according to the English newspaper The Sun would be against Holyfield, a rival that the work team always aimed at of the former world champion.

If materialized, it would be the third time that both titans would face each other in the ring. Holyfield won the exciting first fight on November 9, 1996 by TKO in Las Vegas, when in betting, his rival had a 25 to 1 advantage. In the same scenario, the rematch took place seven months later, in one of the most infamous in history, when on June 28, 1997, Tyson was disqualified for biting his opponent’s ear. For this, he was fined $ 3 million.

You can also read:  Shakur Stevenson defeats the Mexican Valdez and snatches the WBC title

The two veterans total 112 years, Tyson 54 and Holyfield 58, but they are very excited to see each other again. Mike’s return in November 2020 allowed him to win $ 10 million in an event that was paid for television ($ 50) and whose collection reached $ 80 million.

The former North American fighter is also a magnet for everything he generated in his best years, when he became the youngest world champion of all time, at just 20 years old, won 44 fights on the fast track and became the athlete most feared on the planet. That is why today the young people who never saw him fight do recognize him as a legend, which is why seeing him at least in another exhibition, and more before his strongest rival, generates a lot of expectation. In fact, every time a video of his training has been published, it was all the rage on social media.

You can also read:  Cuba dreams of the "rebirth" of its boxing

The latest video posted shows Tyson landing a flurry of powerful shots to the body of his coach, Rafael Cordeiro, as he ducks down and almost effortlessly dodges incoming punches. Those images denote his validity and dedication to continue providing a worthy show on the ring.

For all this, if the event takes place it would be spectacular, although it should be remembered that Holyfield has not fought since May 2011, when he beat Brian Nielsen by technical KO in Copenhagen, Norway.

The reissue of this fight has been talked about for months. It is possible that on his return, Tyson always had Holyfield on the horizon again, and even if it was in an exhibition, this would be a historic evening. (GG) (Infobae)

You can also read:  For expensive, combat between Gonzales and Munguía is in danger