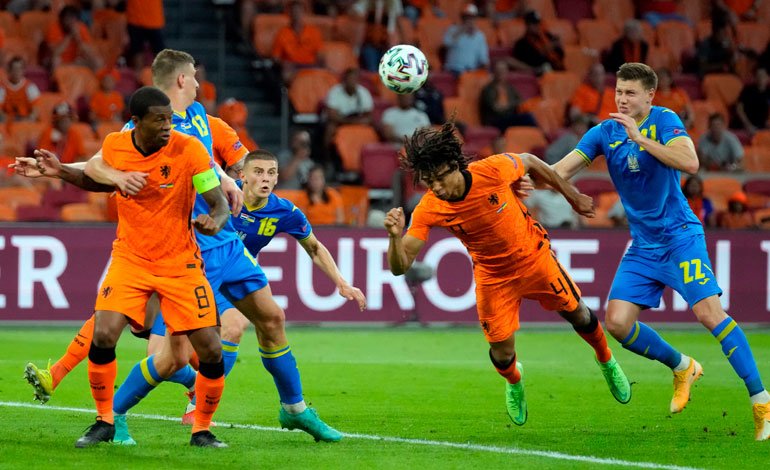 The Netherlands made life difficult but ended up beating Ukraine 3-2 on their debut at Euro 2020 in Amsterdam, a victory that places them second in their group C.

After the unsuccessful gale of the first half, Georginio Wijnaldum opened the scoring for the Dutch after the break (52). Once the can was opened, Wout Weghorst emulated him shortly after (59) and it seemed that a local win was going to take place.

Nothing is further from reality. With a great goal from Andriy Yarmolenko from outside the area (75) and a header from Roman Yaremchuk (79) Ukraine heroically managed to level.

It was rowing to die on the shore because unexpectedly, when he was going through his worst moments in the duel, Holland took the cat to the water thanks to a header from Denzel Dumfries (85).

With these three points suffered, the Netherlands is second in key C, behind Austria, which has the same units and is the leader due to its best goal difference, obtained in its 3-1 defeat of North Macedonia.

Dutch fans paid tribute to Christian Eriksen, who suffered cardiac arrest in the middle of the European Championship on Saturday, unfurling banners with messages of support for the Dane, who in the past played for Ajax in Amsterdam.

The Netherlands only existed in the first part at the Johan Cruyff Arena. The ‘Oranje’ came out in a rush from the first minute for victory and did not let up until the referee sent the players to the locker room.

It is not a saying. In minute 2, Depay took the ball in his own half, got rid of several opponents on the run and his powerful left foot shot was barely deflected by Georgiy Bushchan, who saved in two rebounds.

The Ukrainian goalkeeper was the savior again right after, when defender Dumfries shot alone inside the area and cleared the ball for a corner with his right foot (5).

After a series of Dutch runs in the area that did not end in shots due to inaccuracies, Wijnaldum disturbed the Ukrainian goalkeeper again with a strong volley from the edge of the area (39).

You can also read:  Real Madrid closed with 300 million euros in losses

A minute later, Depay again saw Dumfries alone on the right side of the Ukrainian box, but the PSV player’s header was too soft and missed the baseline.

If the first time was completely Dutch, the second had no owner, being even more entertaining.

– The goals come in the second half –

Marten de Roon sent the ball into the Dumfries run. The winger, one of the best players of the night, put a cross into the heart of the area. Bushchan cleared but the clearance fell to Wijnaldum, who made no mistake with the beaten goalkeeper (52).

Without time to recover, the team led by Andriy Shevchenko conceded the second when Weghorst, outstanding this season with Wolfsburg, scored the second Dutchman after a play full of rebounds (59).

The referee had to consult with the VAR to verify that there was no offside.

With the second goal, the Netherlands ceased to generate danger, although neither did Ukraine. That changed when Yarmolenko hit a left-footed shot from outside the home area, in what became one of the best goals of the European Championship so far (75).

You can also read:  Ryan Giggs attacks his ex-girlfriend detailed in court

The visitors grew up and Ruslan Malinovsky took a free kick that Yaremchuk finished off inside the Dutch area to raise the score to 2-2 (79) and silence the orange spectators.

The Ukrainian feat went unrewarded because, with a precise cross from Nathan Aké that, this time, Dumfries managed to send into the net with his head, the Netherlands made it 3-2. AFP (hn)