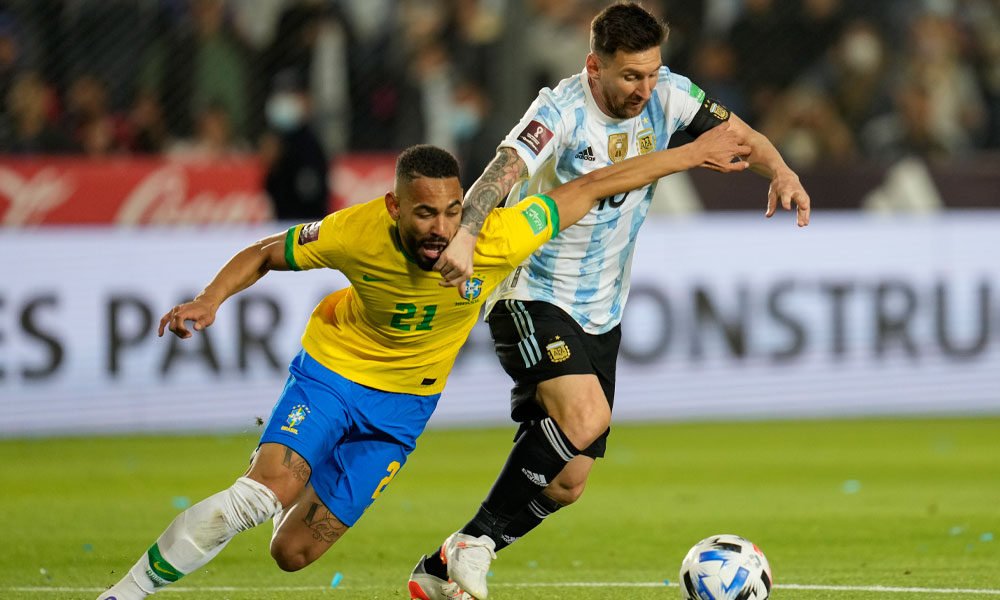 Argentina and Brazil, already classified, drew goalless in a new edition of the South American classic for the fourteenth day of the qualifiers for the Qatar 2022 World Cup.

The team led by Lionel Messi, who did not shine, wasted the possibility of securing a place in the next World Cup and will have to hope that Chile does not beat Ecuador in the game they are playing tonight.

The Albiceleste players learned during the second half that, as the match between Paraguay and Colombia ended in a draw, they could qualify for the World Cup if they beat Canarinha.

The equality achieved in the province of San Juan allows Canarinha to maintain a six-point advantage over Albiceleste with four rounds left before the end of the qualifying rounds.

Argentina, for its part, reached 27 games without defeats, with 17 wins and 10 draws.

Before the start of the game, the Argentine team posed with a flag that read ‘Vamos Kun, con todo’ and which had an image of Barcelona striker Sergio Agüero, who was diagnosed with heart problems.

During the first minutes, Argentina pressed high and opted for the production of short passes. Brazil, on the other hand, defended themselves close to their goal and tried to disturb with counterattacks that took advantage of the speed of Vinicius Junior, Raphinha and Matheus Cunha.

You can also read:  Real Sociedad achieves its first win in this Europa League in Austria

Despite the fact that Albiceleste had more possession during the first 20 minutes, Canarinha was a bit uneasy with mid-range shots that went far from the goal.

With the passage of time, Brazil prevented Argentina from stringing together more than four consecutive passes and became dominator of the match.

A violent elbow from Nicolás Otamendi in the face of Raphinha in the 35th minute produced some shoves and complaints, but the referee did not see the infraction, the VAR did not intercede and the game resumed.

The clearest of the first half was at 40 minutes, when Rodrigo De Paul received a pass behind from Marcos Acuña and defined from outside the area to the far post, forcing Alisson to have to fly over his left to save the shot.

Argentina coach Lionel Scaloni made two changes at halftime: Joaquín Correa entered for a Lautaro Martínez who did not gravitate and Lisandro Martínez for Leandro Paredes, who was coming off a long inactivity due to an injury.

You can also read:  Kun Agüero: "I can't believe what happened, years ago I wanted to share the club with Leo"

Just started the second half, defender Cristian Romero had to be replaced due to injury by Germán Pezzella.

At 60 minutes, Fred’s medium-distance shot hit the crossbar and at 70, Argentine goalkeeper Emiliano ” ” ” ” ‘Martinez blocked a shot from Vinicius Junior.

Brazil needed less of the ball to create more danger, but Argentina also had some scoring opportunities with mid-range shots that missed the goal.

In one of the last plays, Messi shot from medium distance, but Alisson controlled the ball in two halves.

Brazil faced this encounter with several casualties. Neymar, due to injury, and Casemiro, suspended, were the great absentees of the South American classic.

While waiting for the end of the meeting between Chile and Ecuador and with only four days left, Brazil leads the South American qualifiers for the Qatar 2022 World Cup with 35 points, followed by Argentina with 29.

If Chile does not beat Ecuador tonight, Argentina will qualify for the World Cup.

In the next few days, Argentina will face Chile as a visitor, Colombia and Venezuela as a local and finally Ecuador as a visitor.

Brazil, for its part, will visit Ecuador, receive Paraguay and Chile and close with a visit to Bolivia.

Incidents: match of the fourteenth day of the South American qualifiers for the Qatar 2022 World Cup played at the San Juan del Bicentenario stadium, in the province of San Juan, before some 20,000 spectators. EFE (HN)