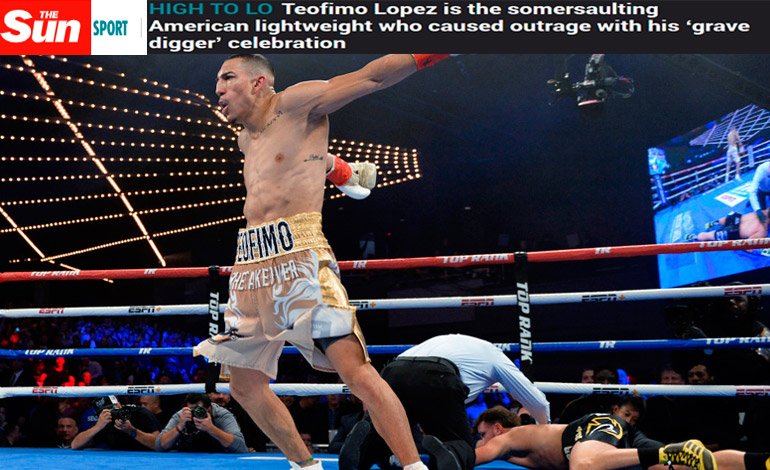 The Honduran-American boxer Teofimo López, is causing a great impact in the world of boxing, to the point that this Wednesday the prestigious UK newspaper, “The Sun”, published an interview in which they describe him as a “boxer with” Brilliant and brutal skills, as his fighting style is liked but also sparked ‘outrage’ with his ‘grave digger’ celebration.

Here is the interview conducted by the journalist who specializes in this sport, Wally Downes Jr, for “The Sun”.

The 21-year-old boxer from Brooklyn (Honduran parents) now has a 12-0 record and will be seen on April 20 on the undercard that will have Terence Crawford vs. Amir Khan as its main fight.

«Love or hate Teofimo López, sooner or later you will see his brilliant and brutal abilities.

Teofimo has been thrilling boxing fans since he turned pro in 2016.

You can also read:  Mosley will be Pacquiao's next opponent

And he caught the attention of millions of casual fans when his twisting fist and outrageous celebrations punctuated his flawless February win over Diego Magdaleno and went viral.

Lopez called the stoppage in the seventh round by mimicking digging a grave, or shoveling dirt, near his defeated opponent, drawing criticism from some boxing fans.

But, ahead of his April 20 fight on Terence Crawford’s undercard against British hero Amir Khan, the 12-0 lightweight sensation has told UK fans to expect much more of the same.

The shovel gesture offended some people.

Lopez told SunSport: “The reaction to the celebration has been mixed. I’ve always done the dances and kickbacks, but the shovel gesture offended some people. “

“Maybe I went a bit far with that, but it was the heat of the moment and I was reacting to some of the things he said about me before the fight.”

“That said, it was a learning experience, and all I can do is keep going and keep showing myself in this sport.” I love UK fans. “

“My passion for the sport is incredible, and before I see a big main event, I will give you a show to remember.”

“It would be great to fight in the UK one day so that all my fans there can see me in person. Don’t forget, April 20 is The Takeover. It’s my hometown!

López should have been a star of the 2016 Olympics for the nation of Honduras, his parents’ native nation, but, like many boxers in Rio, he was robbed by a suspicious judge.

Irish hero Michael Conlan reacted to his own miserable defeat by dipping two fingers into the scoreboard, but Lopez doubled back in a more athletic display of defiance.

Looking back at the shock decision that was booed out loud, López said: “It motivates me to this day because it shows me that nothing is promised to me.

“No matter what we do, what the judges decide is in their hands. I train hard to make sure I don’t leave it up to the judges.

I’m going to steal the show. So I tell fans in the UK to make sure you’re awake because they won’t want to miss out on what I’m going to do. ‘ (Interview and photo from www.thesun.co.uk).