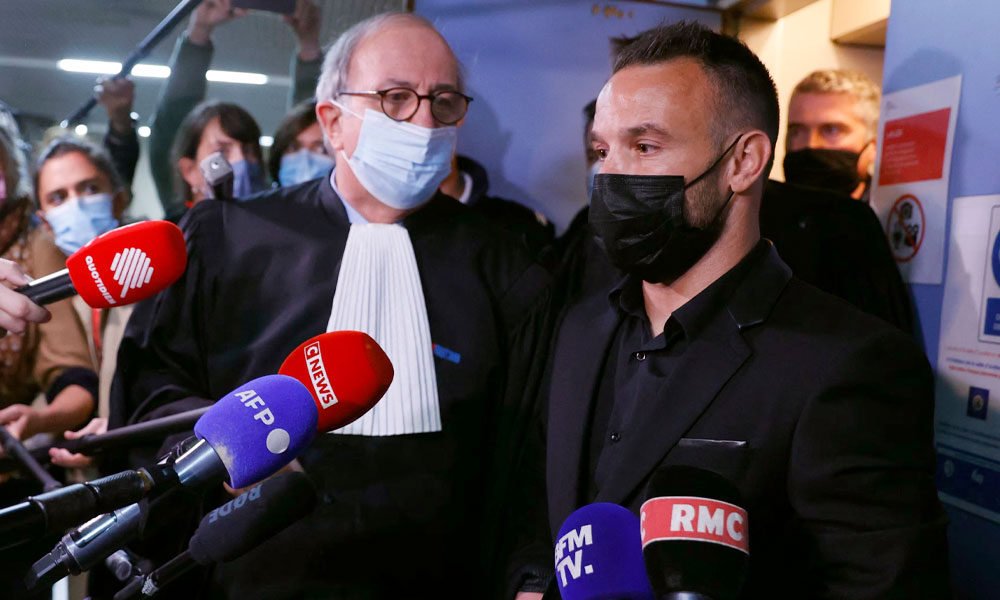 The trial on the attempt to blackmail former French national team footballer Mathieu Valbuena with a sexual video began in France, without the most media accused, Real Madrid star Karim Benzema.

The forward, who played a Champions League match with his club in Ukraine on Tuesday night, was not present at the start of the trial in a court in Versailles, southwest of Paris, unlike Valbuena, AFP found.

His lawyer Antoine Vey explained that the absence of the footballer, who faces up to 5 years in prison and a 70,000 euros ($ 81,000) fine, was due to “professional” reasons, such as preparing the ‘classic’ on Sunday at the Camp Nou against him Barça.

«For five years, [Benzema] He proclaims that he wants a confrontation with my client. I hope the court draws the consequences, “said the plaintiff’s lawyer, Paul-Albert Iweins.

The 33-year-old Madrid player, a candidate for the Ballon d’Or for his performance with the French national team, will be tried for three days for complicity in an attempt to blackmail, along with four other defendants.

During the investigation of the case, the defense claimed in vain a confrontation between both players, especially when the interpretation of what happened differs. Benzema assures that he gave a “friend’s advice” to Valbuena, who sees pressure on his part.

You can also read:  Dybala injured in the Juventus-Sassuolo game

The events date back to October 6, 2015. The French forward goes to Valbuena’s room during a concentration of the ‘Bleus’ at the Clairefontaine training center, about 40 kilometers southwest of Paris.

Benzema explains to his teammate that he can introduce him to “someone he can trust” to help him “manage” the possible publication of a compromising video, according to case documents consulted by AFP.

Be careful, Math. They are great, great bullies, “warns the Real Madrid player, for whom, as he later explained, it was a way to help his colleague. Instead, Valbuena confessed her impression that she was being “teased.”

Although Benzema does not talk about money at any time, the person he recommends is his childhood friend Karim Zenati, with whom the alleged blackmailers had contacted to pressure the midfielder.

The two men at the beginning of the plot are Axel Angot and Mustapha Zouaoui, two individuals who move in the world of football and who recovered the intimate video, with which they seek to profit.

You can also read:  Masked men rob a hotel in Paris where Lionel Messi lives with his family

To pressure Valbuena, they try to go through former French international Djibril Cissé first, who refuses to put them in contact with him and warns his former teammate in Marseille of the existence of the video.

“At first, I didn’t believe it, I thought it was a hoax,” Valbuena admitted to court on Wednesday, who said he felt “in danger” and “fear for [su] sports career (…) if the video came to light ».

Faced with Cissé’s refusal, the blackmailers then turned to Younes Houass, who was well acquainted with the football scene and who first contacted the complainant, before talking to «Luka», an incognito policeman.

The talks end in stalemate and, for the defense, the fact that “Luka” contacted Houass on several occasions represents an incitement to the commission of the crime, an argument that the French Court of Cassation invalidated.

Before the court, Houass assured that he did not ask for money from Valbuena, who, in his opinion, “did not seem to understand” the seriousness of the situation and who advised to go to “a trusted man” to manage the case.

You can also read:  Uruguayan soccer is suspended after the suicide of soccer player Williams Martínez

Stop pretending you were Mother Teresa. You are interested in money, “snapped the president of the court, Christophe Morvan. “I am not Mother Teresa,” acknowledged the accused.

Angot, Zouaoui, Houass and Zenati are thus tried for attempted blackmail, along with Benzema, who for his part is accused of complicity. The Real Madrid player is in fact the last to enter the scene in this plot.

The consequences of the scandal extended beyond justice. The two main protagonists were no longer called up to the French team, until the unexpected return of Benzema on the eve of the European Championship in 2021.

«What he regretted is that Mathieu, the poor man, also deserved to go [al igual que Benzema] to the Worldcup [de 2018] and, we have to be honest, because of us, it was not, “Zouaoui told reporters upon arrival at court. AFP (HN)