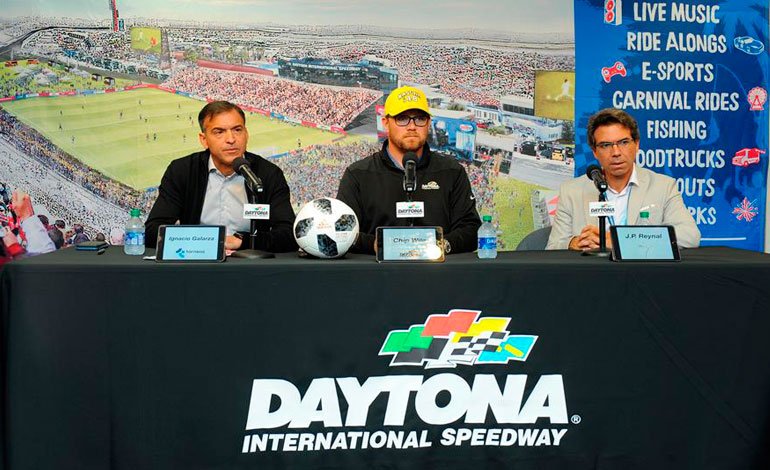 Daytona, the Florida city famous for automobile competitions, will host from 2021 a festival of soccer, music, races and other activities for which for the first time a soccer field will be installed, with a capacity of 50,000 spectators, in its famous circuit.

The first Daytona Soccer Fest will be held on July 4, 2021, announced this Saturday the architects of the project, which was presented within the framework of the 62nd edition of the 500 miles of Daytona.

Daytona International Speedway, the company responsible for the circuit, and the sports and entertainment company Torneos, leader in Latin America, announced together with the local production company Onside Entertainment this Saturday that they have signed an agreement to organize a festival that allows to witness football and musical shows world class while testing race cars in the category preferred by Americans.

All this within the framework of the celebration of July 4, the Independence Day of the United States.

The five-year agreement was signed by Chip Wile, president of Daytona International Speedway, and Ignacio Galarza, executive director and general manager of Torneos, in association with John P. Reynal, president of OnSide Entertainment.

You can also read:  Slight improvement in Schumacher's health announced

The construction of the regulation soccer field, the first within an automobile circuit in the United States, will require an investment of one million dollars.

The grass will be artificial, since the natural one would not withstand a high number of matches in just two days, and once the festival is over, the field will be dismantled and saved to be assembled the following year.

The general public will be able to watch the games from the usual stands that are part of the oval’s scenography and in stands raised especially for the occasion.

Simultaneously, motorsport fans will be able to act as co-drivers uploaded to the NASCAR category tester cars on the circuit that hosts the famous 24 Hours of Daytona, and driven by official drivers.

A large stage will be built on the side of the soccer field.

On the main stage, whose lawn can accommodate up to 10,000 people standing, international-class musical shows will be presented, crossing Latin-American culture with artists and renowned pop culture bands.

You can also read:  Hülkenberg to contest the 24 Hours of Le Mans with Porsche

Bands will sound outside of 90 minutes of soccer games. Concerts on the main stage can be viewed from the oval gallery or directly from the lawn. On the secondary stage, the side, alternative bands can be heard.

“It will be a groundbreaking event,” Circuit President Chip Wile said in a joint statement.

“We are always looking to add new events to our already busy calendar. Being able to host a professional international soccer match at the Triple Oval along with other fun-filled family activities on the weekend of July 4th will be an incredible opportunity to showcase our state-of-the-art facilities, ”he added.

For Tournaments, Soccer Fest is an opportunity to continue growing regionally.

“It will certainly be a unique experience. We will introduce world-class soccer to growing American fans in this incredible setting, ”said Ignacio Galarza, executive director of Torneos.

Galarza explained in statements sent to Efe that the agreement between Daytona International Speedway, Torneos and OnSide is for five years at this location, with the possibility of extending it to other NASCAR circuits.

The two-day Daytona Soccer Fest won’t just be about soccer, shows and racing.

You can also read:  In China, Ferrari makes fans dream

It is designed to please all members of the family, from an amusement park to an e-sports tournament and a gastronomic and food truck area with food offers for all tastes.

Within the 600 acres (243 hectares) of the circuit there is an artificial lake and a wooden platform prepared for sport fishing that will be open to attendees of the Independence weekend. The camping area will also be open to the general public.

“Two years ago this idea began to be worked on. We saw an opportunity to add value to this incredible complex, organizing a soccer festival as a way to add to the sports motorsport entertainment proposal that Daytona already has, and with a unique experience due to its characteristics in the world “, explains John P Reynal from OnSide Entertainment in charge of local production.

To monitor the festival in real time, the organizers develop an app that will be available from July 4, 2020, the date from which tickets for the first edition will go on sale. AFP