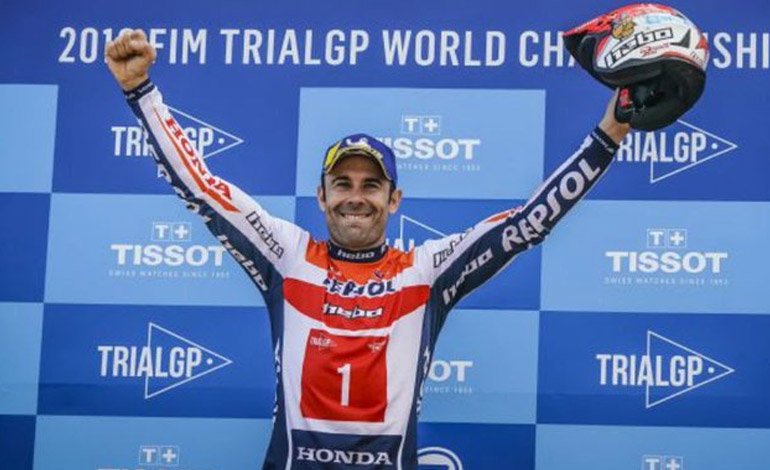 The Spanish Toni Bou (Repsol Honda Team) was proclaimed in Auron (France) world trial champion for the thirteenth consecutive time, although his world titles amount to twenty-six if those obtained indoors are added.

In the absence of a test for the end of the 2019 TrialGP season, the 32-year-old from Barcelona “has defended his crown by completing an outstanding season” in which he has achieved seven victories, including this weekend, the team highlighted Repsol Honda in a statement.

The Repsol Honda Team rider set ground from the start in a race with long and steep areas in which he worked hard and only suffered nine penalties, which allowed him to sentence the title.

You can also read:  Yamaha will not replace Valentino Rossi at the San Marino GP

After his triumph, Toni Bou explained that in Auron’s career it was “very difficult” for him to make a difference, especially in the first sections.

“We have done so and we have reached 0 to zone 8. We have marked a very intelligent race, I felt very comfortable on the bike. As always, there is no better way than to win a new title than with a victory and with good feelings ”, explained the Catalan.

In his opinion, it was a “short but intense” World Cup and a season in which they “matured a lot”.

You can also read:  Briton Meeke follows first in Mexico and keeps French Ogier at bay

“Last year we had many injuries, this year we have been very comfortable on the bike, we have seen with the victories and the riding, so now we have to live in the moment and enjoy the holidays”, concluded Bou.

That of Auron is the 111th victory of his career and certifies his hegemony in the discipline, since it is the thirteenth successive triumph in the Trial World Championship, in which this year he has been full of victories.

The last round of the championship will be held on September 21 and 22 in the Valencian town of La Nucia.

You can also read:  Vettel with the «pole»; Alonso will start third