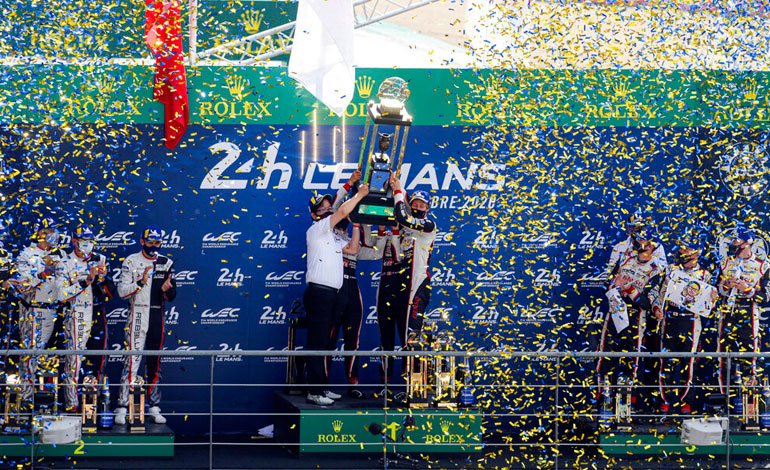 Toyota achieved its third consecutive victory at the 24 Hours of Le Mans thanks to the performances of its N.8 drivers Sébastien Buemi, Kazuki Nakajima and Brendon Hartley.

The second place went to the Rebellion of Norman Nato, Bruno Senna and Gustavo Menezes, which in turn beat another Toyota, that of Kamui Kobayashi, Mike Conway and the Argentine José María López.

The Japanese constructor was not disturbed in this 88th edition of the legendary race.

This hat-trick allows Toyota to keep the trophy as its property, which can be displayed at the brand’s factory in Japan.

It was also the third victory at Le Mans for the Swiss Sébastien Buemi and the Japanese Kazuki Nakajima, and the second for the New Zealander Brendon Hartley.

You can also read:  Marc Márquez: «I learn a lot with the children and I see things that I have to improve»

“We thought everything was lining up against us at the beginning, but eventually we ended up five laps ahead,” said Buemi.

His vehicle suffered from brake problems in the early hours of the race.

Brendon Hartley said for his part that the atmosphere “was not at all the same without the fans”, but that winning a second time at Le Mans is “a great feeling”.

This 88th edition took place behind closed doors due to the coronavirus pandemic and took place exceptionally in September, when it is usually held in June.

In principle, Toyota will not participate in the next edition of the legendary endurance race in 2021 with its hybrid TS050, as it will prepare for the new category of ‘hypercars’ from 2022.

You can also read:  Hamilton fastest in third US GP free trial session

Buemi and Nakajima prevailed in 2018 and 2019 with Fernando Alonso, double Formula 1 world champion.

But the Spaniard decided to prepare this year for his return to Formula 1 next season with Renault.

His replacement was Brendon Hartley, a 2017 Le Mans winner with Porsche.

After starting from pole on Saturday, the No. 7 of Conway, Kobayashi and Lopez led until the middle of the race, before being forced to change their turbo. AFP (HN)