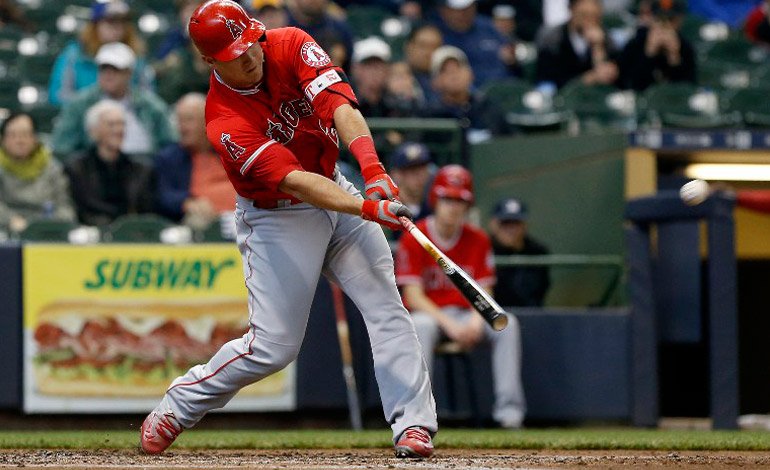 Center fielder Mike Trout provided the timely and productive bat that allowed the Los Angeles Angels to come from behind and earn a 7-3 victory over the Milwaukee Brewers in interleague play.
Trout hit an RBI triple and ignited a four-run eighth inning with a solo homer to give the Angels the win.
The Angels’ star slugger tied the game 3-3 by leading off the eighth with a drive to right field off a curveball from reliever Tyler Thornburg (2-1), who was going to take the loss.
The Angels’ attack, five batters later, with pinch-hitter CJ Cron produced the go-ahead run with a two-out double on the board.
The victory allowed the Angels to avoid a three-game series sweep.
Trout, a four-time All-Star, has 18 RBIs in his last 13 games after a slow start.
Latin batting was present in the Angels’ offense with Cuban Yunel Escobar who went 2-4 with a run scored. Venezuelan Rafael Ortega 5-1 with a run scored and produced, and Puerto Rican Geovany Soto 3-0 with a run scored.
Mexican reliever Fernando Salas (2-1) went through a scoreless inning for the win, while closer Joe Smith pitched two scoreless innings for his second save.
The Brewers took a 3-2 lead in the sixth when third baseman Hernán Pérez ran from third base to the rubber after a wild pitch by reliever Cam Bedrosian.
Despite the loss, the Brewers attack had the support of Dominican Jonathan Villar who went 1-for-4 with a run scored and Pérez had two hits in four trips to the batter’s box to get a pair of runs scored and an RBI. .EFE