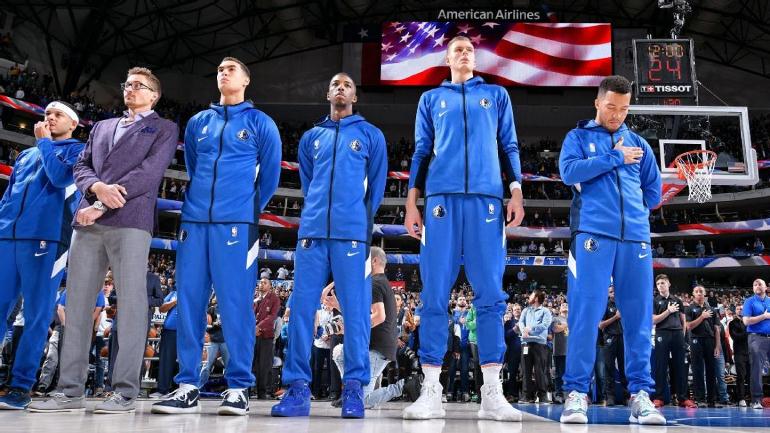 The Dallas Mavericks are in the news, and for the first time in a long time it is because of something other than what happens on the court. The Texas franchise has made the decision that the national anthem of the United States will not sound in the preview of the games that they play at home. Obviously, the subject in question has generated some controversy among different NBA fans. Despite the uproar, the person responsible for this change and owner of the Mavs, Mark Cuban, has not explained anything to the media.

On the other hand, ESPN reports that this new measure has been consented to by the NBA and its commissioner Adam Silver. An agreement they reached before the start of the season, since in the 13 times a game has been played at the American Airlines Center this year, the famous The Star-Spangled Banner has not sounded. A change that so far has gone unnoticed since no player, coach or manager of another team has mentioned. Everything indicates that it could be a proposal from the players themselves to Mark Cuban, who has given importance to his employees in this more social facet of the Mavericks.

You can also read:  Doncic and Jokic play the Three Wise Men; surprise defeats by Bucks and Celtics

“If they kneel down and are respectful, I will be proud of them. I wish I would join. I hope that the League allows the players to do what they have in their hearts. Whether they raise their arms in the air, whether they kneel, whatever it is, I don’t think it is a question of respect or disrespect for the flag or the anthem or our country. I think this is more a reflection of our players’ commitment to this country and the fact that it is so important to them that they are willing to say what is in their heart and do what they think is right, “Cuban said in a interview conducted in June with the League immersed in the cause of Black Lives Matter.

You can also read:  Durant and Thompson impose scoring inspiration and win Warriors

From another point of view, the Dallas organization has been accused of carrying out an act that is not in accordance with the regulations established by the NBA. However, this is not the case. Since the Orlando bubble, Adam Silver has allowed the rule that before starting a match players listen to the American anthem standing up from being mandatory. A license that the Mavericks have taken advantage of. (GG) (NBA Manicas)