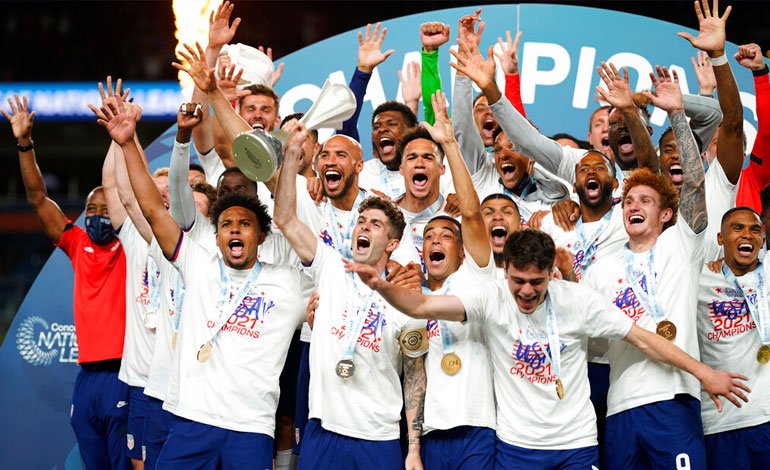 The United States team was proclaimed champion of the first edition of the Final Four of the Concacaf Nations League by beating Mexico 3-2 in extra time.

The goal that decided the victory for the United States came in the 114th minute through Chelsea striker Christian Pulisic, who beat Mexican goalkeeper Guillermo Ochoa low.

The referee of the match, the Panamanian John Pitti, after reviewing the VAR, considered that the Mexican defender Carlo Salcedo had knocked down Pulisic himself inside the area.

Then Mexico could have equalized when at minute 120+2, referee Pitti also had to go to VAR to decide that defender Mark McKenxie had touched the ball with his arm inside the area.

Midfielder Andrés Guardado, who had left in the second half, was in charge of throwing it, but he did it poorly, from low, and the young United States goalkeeper, Ethan Horvath, who had left in the 69th minute due to injury to starter Zack Steffen emerged as the hero of the Stars and Stripes box by fending off the ball.

You can also read:  Barcelona frustrates the Brazilian plenary session in the semifinals of the Copa Libertadores

The United States, which had always been behind on the scoreboard, in the end took the victory in a game that in the last 40 minutes was plagued by interruptions, objects thrown onto the field by the fans and the expulsion in the 113th minute of the game. Argentine Gerardo Martino, coach of Mexico to enter the field.

There was also a three-minute interruption by referee Pitti when Step 1 of the Concacaf Anti-Discrimination Protocol was established after hearing among the fans the homophobic cry that Mexican fans sing.

The Mexican team started the game brilliantly by scoring 0-1 when they had barely played two minutes and Jesús Corona recovered a ball inside the United States area and shot Steffen.

But the United States reacted and in minute 27 it was Gio Reyna who put the tie on the scoreboard after finishing off the ball that had bounced off the post after a header from Weston McKennie.

The scoreboard did not move further in the first half and in the second, with a better game for the United States, Mexico was once again the one that would take the lead when, in the 79th minute, Diego Lainez, the Real Betis player, shot low and beat Horvath.

You can also read:  Inter defeats the Sheriff and gets into the fight

But the joy did not last long for the Mexican team because it would be McKennie, who again in his corner kick finished brilliantly with a header and surpassed Ochoa’s stretch to get the tie at 2-2, with which the end of the game was reached. regulation time.

Then the history of the game was defined by Pulisic with his penalty goal and Guardado with his failure to allow the United States to take the title of champion with all deserved.

Before the duel between the United States and Mexico, the Honduran team won the sudden death penalty shootout series 5-4 over Costa Rica in a match for third place after regulation time had ended tied at 2.

You can also read:  Spinazzola's injury, a "terrible loss" for Mourinho

Incidents: Match for the title of the Concacaf Nations League Final Four tournament that was played at Empower Field at Mile High (Denver) before more than 34,000 fans at 40 percent of the capacity allowed by health protocols of the Covid-19. EFE