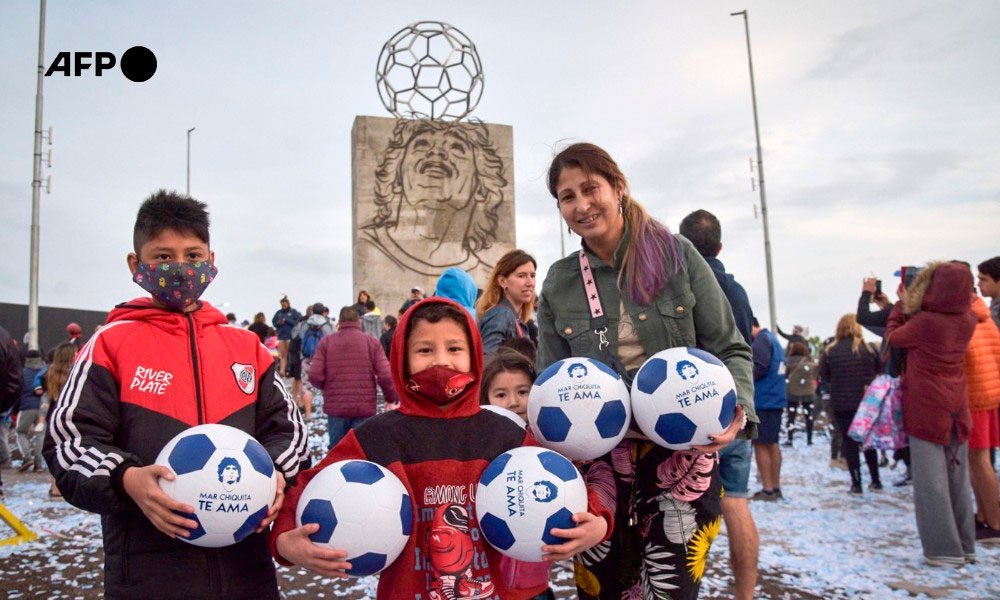 The image of Diego Maradona and the ball over his head was eternalized in a huge monument inaugurated on Saturday in Santa Clara del Mar, 400 km south of Buenos Aires, in tribute to the late soccer idol on the day he would have turned 61 years.

A rain of soccer balls accompanied the discovery of the largest monument dedicated to Maradona in Argentina, while a cloud of dozens of children celebrated the gift at the foot of the image of a smiling Diego.

“All these people who were gathered here to see how they discovered this monument, is one more manifestation of the deep eternal love that people have conferred on those who have earned it,” said the commentator and friend of the former soccer player, the Uruguayan Víctor Hugo Morales , one of the presenters of the inauguration.

The event shocked this small coastal town in the province of Buenos Aires, of just 8,000 inhabitants, which now houses the largest monument erected in Argentina in honor of the captain of the champion team in the 1986 World Cup in Mexico.

The work is a 13-meter-high concrete monolith along which the image unfolds with Maradona’s face crowned by a ball, both made of steel tubes.

The piece, by the plastic artist Sebastián Martino, is called “Amada mía” in allusion to the romance between the soccer star and the ball.

«Never in my life did I do something so monstrous and with such an incredible team of people, to see that it was taking shape according to what I wanted it to be, what I dreamed and sketched, when I saw it finished, it was a dream come true, It was very exciting, ”Martino told AFP.

You can also read:  PSG, the team with the highest number and effectiveness in passes according to CIES

The inauguration included the projection of images with different moments in the life of the star who died on November 25, 2020 in Buenos Aires due to a cardiorespiratory crisis and days after having been successfully operated on for a hematoma on the head.

Also on Saturday, the Argentine league matches stopped at minute 10 as a tribute to the sports idol. AFP (HN)