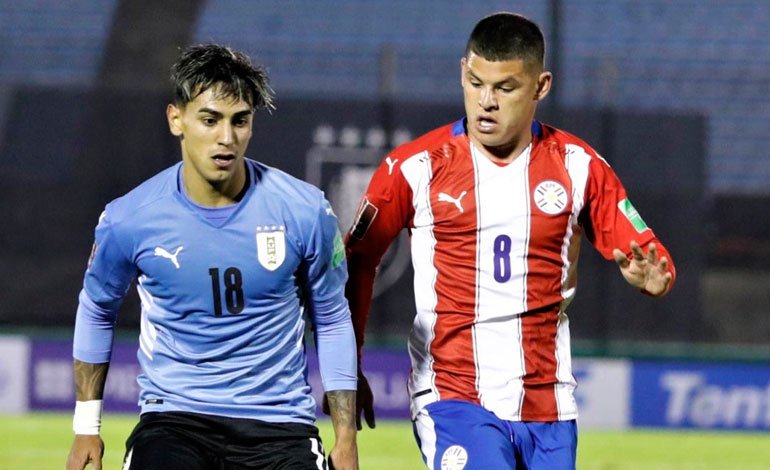 Uruguay gave Paraguay a 0-0 draw at the Centenario stadium that leaves both teams with the same 7 points after a hard-fought match and few goal situations corresponding to the seventh date of the South American qualifiers for the World Cup in Qatar.

Today the goalkeepers were almost spectators and hardly had any participation.

Before the first minute of the game had passed, Uruguay quickly looked for Luis Suárez, who turned from the center to the left.

On the other side, winger Omar Alderete launched himself to the left trying to connect with Miguel Almirón and Ángel Romero, the red-and-white’s scorer in the qualifying rounds.

Guarded by three central defenders, the sky-blue wingers stepped forward on the field and helped the midfielders so that those led by Óscar Washington Tabárez could constantly press their rival’s exit from the back.

You can also read:  Heung-Min Son saves Korea over the hood

About ten minutes in, after a long free kick executed in a great way by Federico Valverde, Suárez missed the first goal inside the small area in an incredible way. That was the first warning from the Atlético de Madrid footballer.

Paraguay was not far behind and responded first with a powerful shot from Ángel Romero that sent Fernando Muslera flying and then with a header from Alderete that the goalkeeper stopped without any problems.

With the match tied without goals, Jonathan Rodríguez took advantage of a pass inside the area by Matías Vecino and beat Antony Silva. However, the cry of the Uruguayans was extinguished when the assistant raised his flag marking an advanced position of Viña that generated many doubts.

You can also read:  River Plate heading for title in Argentina

The Palmeiras winger did not touch the ball at any time during the play and it was never clear if it disturbed the goalkeeper’s vision in the face of a shot by Suárez.

In the last 20 minutes of the first half, the match was parked in the middle of the field and the danger options disappeared completely. Rodrigo Bentancur received a yellow card and was suspended for the duel between Venezuela and Uruguay the next day.

At the beginning of the second half, the game did not change and the ball was once again away from the areas. The coaches tried to change with variants that were more offensive on the side of the local team.

You can also read:  Spain prevents those summoned from traveling to South America

The entry of Facundo Torres gave Uruguay more play, which approached once again through Suárez. On the day of his debut, the young Peñarol midfielder tried to handle the ball and constantly pushed his team, albeit with little success.

Paraguay opted for the counterattack with Almirón’s speed, but the English Newcastle footballer was well controlled by José María Giménez and Diego Godín.

With the two teams standing well behind, the situations did not come anywhere and the match ended with a scoreless draw.

In this way, Uruguay was left without winning the second of three games. EFE. (JL).