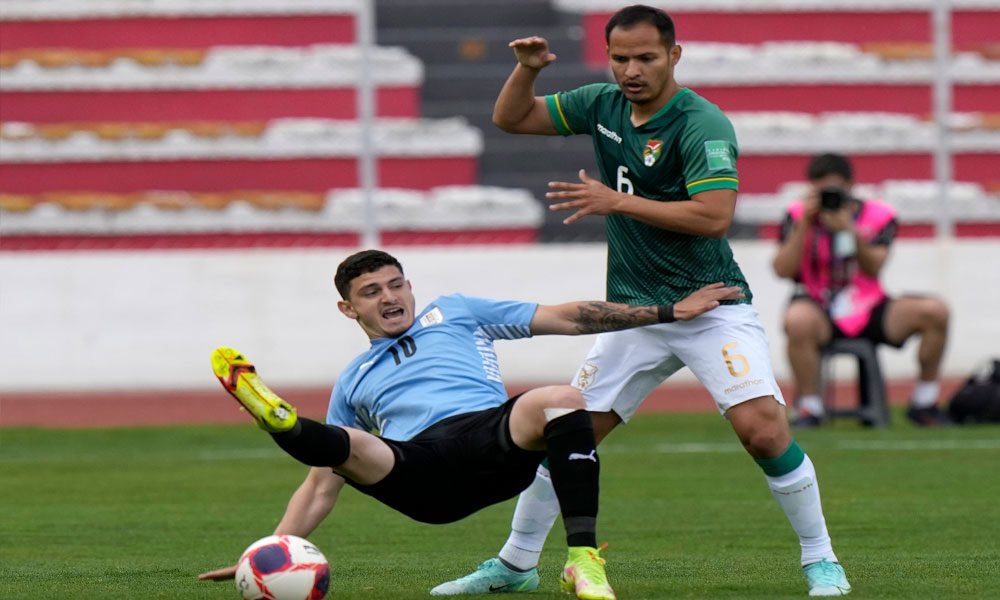 A double by Juan Carlos ‘Conejo’ Arce and a score by the top scorer of the South American qualifiers, Marcelo Martins Moreno, gave Bolivia a 3-0 win over Uruguay that has complicated their chances of going to the Qatar 2022 World Cup.

The team led by the Venezuelan César Farías was respected in the altitude of La Paz thanks to a brilliant Arce who scored in the 29th and 78th minutes, and to Martins at the edge of the end of the first half on the fourteenth day of the South American qualifiers.

The result provisionally left Óscar Washington Tabárez’s squad in seventh place in the standings with 16 units, one more than Bolivia, which for now remains in eighth place.

The first half was relatively even, with a Green that had great difficulty reaching the goal guarded by Fernando Muslera and Celeste in a hurry, without being able to counterattack effectively.

You can also read:  Chelsea need penalties to go to the quarterfinals in the League Cup

Martins and Arce were very active from the beginning together with the youthful Víctor Ábrego.

In the 26th minute, Nández had the opportunity to open the scoring with a shot that went wide for Lampe’s fortune.

The long-awaited first target was the work of the luck of the ‘Rabbit’ Arce, who in the 29th minute tried a shot from the side with the apparent intention of connecting with Martins.

The shot collided with Muslera’s hand and then hit the left post of the Uruguayan goal and ended up in the back of the net.

The second Bolivian conquest was the work of ‘Matador’ Martins, who was able to score his ninth goal so far in the qualifying rounds with the assistance of an inspired Arce.

In the first minutes of the second half, those led by ‘El Maestro’ Tabárez showed a much more offensive game and the attacks against Carlos Lampe’s goal did not stop.

You can also read:  Modric, Kroos, Varane, Alaba and Bale tune in Madrid

The Charruas almost equalized in the 57th minute with a center from Torres that went to ‘Gigante’ Lampe and defender José Sagredo managed to serve in a timely manner.

The person in charge of executing it was Martins who kicked the ball too hard and over the crossbar.

Farías’s men were left with ten on the field in the 74th minute when Sampaio sent off striker Algarañaz for a very hard foul on Uruguayan captain Diego Godín.

Despite the disadvantage, the locals did not give up and Arce scored the third in the 78th minute with a header after receiving a cross from Fernando Saucedo, leaving the die cast for both teams.

You can also read:  Istanbul will host the 2023 Champions League final

Incidents: Match of the fourteenth day of the South American qualifying rounds of the Qatar 2022 World Cup played at the Hernando Siles stadium in La Paz. EFE (HN)