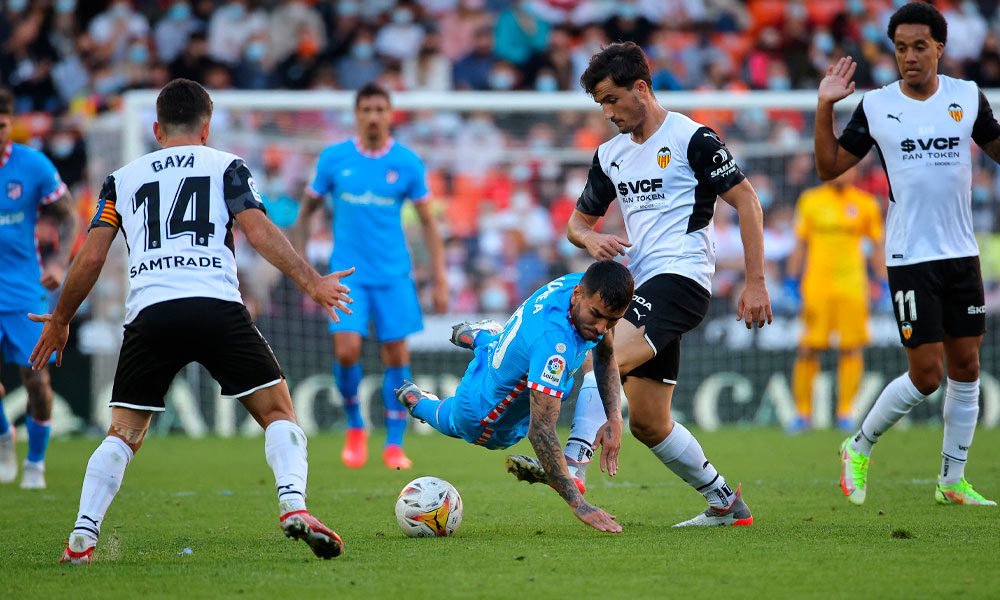 Atlético de Madrid let a game that won 1-3 in the 90th minute escape from Mestalla after the faith of Valencia led them to neutralize the visitors advantage in added time, with two goals from Hugo Duro (3-3).

A goal from Luis Suárez allowed Diego Simeone’s team to retire at halftime with an advantage on the scoreboard, and although Valencia tied with an own goal from Savic, Atlético almost immediately regained command on the scoreboard with two goals from Griezmann and Vrsaljko.

In a new frenzy at the Mestalla, Valencia managed to equalize the score through the recently entered Hugo Duro, author of the two goals in the final draw at the Valencian coliseum. Duro entered the field in the 85th minute and did not need more than ten minutes to tie the game.

The clash had a lot of intensity from the start, although with Atlético closer to Cillessen’s goal but without the Valencian goal being seriously compromised.

The result of that intensity came the first problem for Atlético with Trippier’s early injury, who damaged his shoulder after a bad fall in a foul by Valencian Hélder Costa.

You can also read:  Real Madrid draws but continues to lead

While Simeone’s team frequently stepped on the premises’ plot, Valencia had many difficulties to combine in the vicinity of the Oblak area, which in the first 25 minutes had little to intervene.

In fact, it would not be until minute 28 when the Atlético goalkeeper had to appear to stop a shot from outside the area, the Portuguese Guedes.

Atlético arrived well to the front of the Valencian area, but without being able to complete the plays until the Uruguayan Luis Suárez, who beat Cillessen after easily surpassing Diakhaby with a cross shot that hit the post.

His offensive trident participated in the athletic goal. Griezmann started the play, yielded to Argentine Correa and he assisted Suarez to finish.

After the goal there was a slight Valencian reaction and a certain withdrawal from Simeone’s team but without consequences for the scoreboard.

At the start of the second half, a header from Griezmann was close to increasing the Madrid team’s advantage but it was Valencia who managed to establish the equalizer in the 50th minute with an own goal from Savic after a shot from Guedes in the area Oblak cleared and bounced off Savic.

You can also read:  PSG continue to party in France

But the joy did not last long for the Valencians because in 57 Griezmann scored a goal from outside the area and two minutes later, and after a confusing play and VAR consultation, Vrsaljko made the third.

The goals were a hard blow for the Valencians, who did not have the same fortune as the rival in the next action when Wass crashed a ball off the crossbar in a shot very close to Oblak’s goal.

José Bordalás’s team looked more for the area of ​​an Atlético that, knowing of its advantage, fell back well behind but in search of a counter-attack with which to increase its advantage.

In the final stretch the Valencian team pressed what it had not done throughout much of the crash. Thus, Hugo Duro closed the gap on the scoreboard in the first minute of added time, after taking advantage of an error by Kondogbia in a rojiblanco attack.

You can also read:  USA and Canada for first win in qualifying rounds to Qatar-2022

With Mestalla erupting and Valencia overturned, ecstasy reached the stands with another goal by Hugo Duro in 96 that prevented the athletic triumph and left at least one point in Mestalla.

Referee: Soto Grado (Riojan Committee). He showed a yellow card to the locals Guillamón and Musah and to the visitors Vrsaljko and Griezmann.