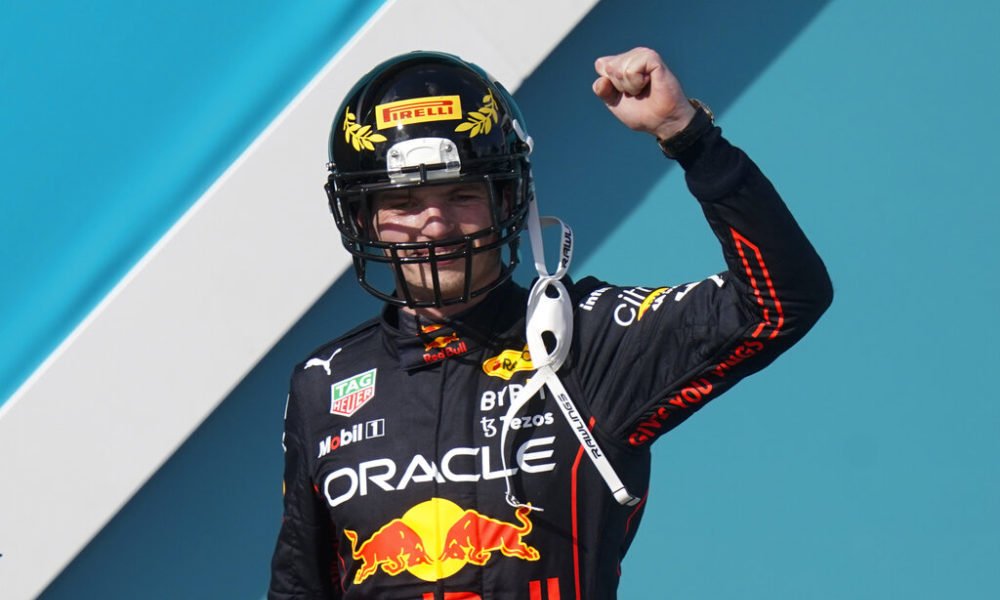 Max Verstappen capitalized on an aggressive maneuver to overtake championship leader Charles Leclerc and then controlled the inaugural Miami Grand Prix at will to claim his third win of the season.

The reigning world champion started third, but Red Bull wasted no time in submitting Ferrari for the second successive race. Leclerc and Carlos Sainz Jr. held the top spots in qualifying for Ferrari, but Verstappen rushed in to leave Sainz behind.

Verstappen then went on the hunt for Leclerc and managed to take the lead on lap nine with an excellent pass on the outside. Verstappen was in no hurry to defend the top spot, save for a collision between Lando Norris and Pierre Gasly near the end, which prompted a 10-lap sprint to the finish on the 5,410-meter (3.36-mile) circuit around the Hard Rock. Stadium.

Leclerc had a few chances to overtake on the inside, but Verstappen made no mistake and the Dutchman ended up winning by 3.7 seconds.

He also won two weeks ago at Imola, where the Red Bulls took advantage of a weak weekend for Ferrari in their Italian fiefdom for a 1-2 of Verstappen and the Mexican Sergio Pérez.

In Miami, Ferrari had to settle for second place for Leclerc and third for Sainz.

“Checo” Pérez entered fourth with Red Bull, while Mercedes exhibited a notable improvement George Russell and Lewis Hamilton from fifth and sixth, respectively. It was the fourth time in five races that Russell, in his first year with Mercedes, has beaten the seven-time world champion.

You can also read:  F1 prepares contingency measures for Brexit

After five races in the year, Leclerc remains at the top of the drivers’ standings with 104 points, ahead of Verstappen’s 85.

The race — the first of a 10-year contract in Miami — didn’t deliver the thrills that the 85,000 spectators expect after purchasing their tickets. The organizers didn’t even have to open a sales period given the huge demand and being around Hard Rock Stadium was the party zone for the last three days.

On the day of the races, the famous did not miss. Paris Hilton danced in front of the McLaren garage workshop; Tom Brady, David Beckham and Michael Jordan posed for pre-race photos with Hamilton, who met former first lady Michelle Obama at the track on Saturday. Serena Williams was in the Mercedes hospitality space and Puerto Rican rapper Bad Bunny arrived at the circuit with Pérez and spent almost all of the Red Bull preparations with the Mexican driver.

You can also read:  Oliver Rowland achieves his sixth win of the season

The race in Miami leaves the United States with two events in one season for the first time since 1984. F1 will add Las Vegas as the third American race in 2023. (AP)