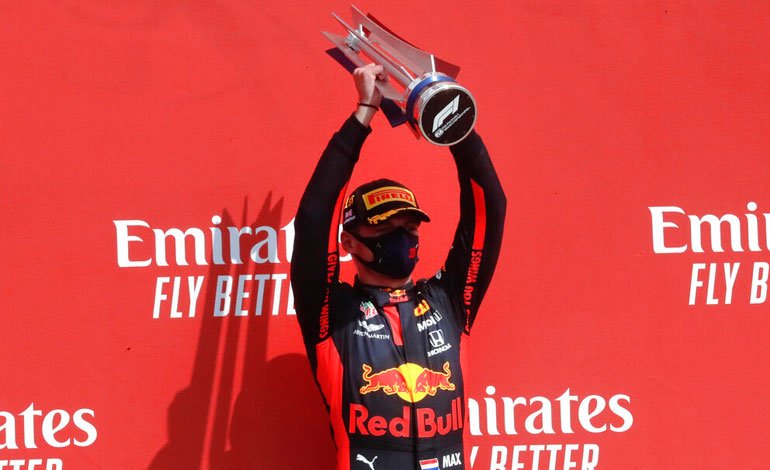 Max Verstappen starred in the big surprise of the Formula One season by beating Lewis Hamilton to claim victory in the 70th Anniversary Grand Prix on Sunday.

But Verstappen’s masterful handling of his tires tipped the balance in his favor.

“I wasn’t expecting it,” Verstappen said after his ninth career win. “But after the first ‘stint,’ it seemed like we were really good on the tires.”

“We had a lot of pace in the car. I didn’t have many problems with the tires and we kept pushing “, he added” It’s an incredible result to win here … Everything went well, we had the right strategy. I am incredibly happy for the victory. “

In the second weekend in a row in England, Mercedes was a wide favorite for its fifth victory in as many races this season.

You can also read:  Hamilton: "From the beginning I noticed that something was wrong"

But both Hamilton and Bottas had a difficult afternoon with their tires.

“We have suffered a lot,” said Hamilton. “Congratulations to the Red Bull team and Max. They didn’t have the same problems as us. “

Hamilton won fairly last weekend, crossing the line on a blown tire and Verstappen hot on his heels.

According to the British driver, the increase in tire pressure after what happened in the previous race made them look like “balloons” and that this could harm Mercedes.

“I didn’t expect to have as many blisters as we have here,” Hamilton said. “I was nervous that the tire might explode. I am very grateful to have progressed and made my way in the race

Hamilton extended his lead over Bottas in the drivers’ standings to 34 points heading to the Spanish Grand Prix next weekend.

The Mercedes had been dictatorial this year. Bottas started on pole and kept Hamilton at bay in the first corner, suggesting that it would be another monologue from the Silver Arrows team.

But Verstappen, who passed Nico Hulkenberg (Racing Point) in the first corner, did not miss them. Both Mercedes started on intermediate tires, and Verstappen on harder material.

Verstappen sensed that both Mercedes were not doing well and set out to hunt Hamilton. He was instructed not to push too hard to preserve his tires.

“This is the only chance to be close to Mercedes,” he said on the radio. “I will not be left behind like a grandmother!”

And he remained aggressive. Bottas completed a refueling on lap 13 and Hamilton did it on the next to change tires. Verstappen seized the lead by changing tires in the middle of the race, pitting just behind Bottas.

You can also read:  Rosberg wins in Brazil and secures runner-up

Both Verstappen and Bottas pitted for the second time with 20 laps remaining. Hamilton chose to demand his until lap 42 of 52.

Hamilton emerged fourth, but the 35-year-old veteran showed better pace after the tire change and posted the fastest lap of the race and managed to outrun Leclerc to finish third. He proceeded to catch up with Bottas, managing to displace his compatriot with two laps to go.

Hulkenberg finished seventh. Sebastian Vettel, with the other Ferrari, was left out of the distribution of points, placing 12th after a spin on the first lap. AP (HN)