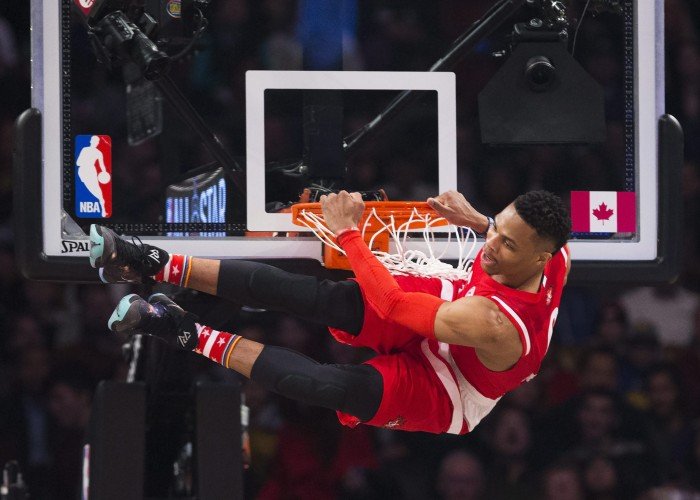 The Western Conference team beat the Eastern Conference 196-173 in the All-Star Game, a combined scoring record, with an excellent offensive contribution from Russell Westbrook and point guard Chris Paul, in a match that can be said to have been the Kobe Bryant’s farewell party.
Wesbrook overflowed with 31 points and eight rebounds, to repeat for the second consecutive year the MVP (Most Valuable Player) award of the game, while Paul finished with a whopping 16 assists and 14 points off the bench.
For the boys from the East, the most outstanding were Paul George, with 41 points; John Wall, with 22; and DeMar DeRozan, with 18. Russell Westbrook was the best of the game.

Without a doubt, the meeting, held on Valentine’s Day, was the perfect setting to turn it into Bryant’s party, applauded throughout the night, both by the spectators and by the players of both teams.
Bryant, who continues his farewell tour after announcing he is retiring after this season, had a sensational night as he left with 10 points, all in the first half, five rebounds and seven assists.
Celebrating his 18th All Stars, Bryant was praised before the game began, when the legend of Magic Johnson dedicated a few words to him and reminded fans that the player has received more than 30 million in all his selections for the galactic game votes. «There will never be another Kobe Bryant, that the whole world stand up and make me listen to him again. This is your time,” said Magic Johnson. The chants of “Kobe,
Kobe” flooded the stadium. Then, it was the turn of the protagonist of the night.
At 37, Bryant is obviously not the same player he was when he helped the Lakers win five championships, though throughout the season he has shown glimpses of what made him an elite player of all time. “I want to thank you for the support of all these years. I have been extremely fortunate to have played the game I love and to have been in the NBA for more than half my life,” Bryant said.
LeBron James finished with 13 boards, just enough to pass Bryant in the All-Star Game 291-290.
After the first two quarters, before going to the intermission, the scoreboard showed a small advantage of the East team of 92-90, a combined record for a first half in this type of meeting.
The first part ended with several fantasy plays, with excellent combinations for the East between Dwyane Wade and LeBron James, who brought to mind when they won two titles in four NBA Finals with the Miami Heat.
In the West, there were several spectacular plays with protagonists such as the point guard and once again elected MVP in this match, Westbrook and Kobe Bryant himself.
Those from the West opened the third quarter with an 18-10 offense, to take a 118-102 lead. That stretch ended with a layup by Dominican Al Horford that brought his team closer to 145-136.
Until that period, the top scorer in the game was George, already with 32 points for the East, while in the West, Anthony Davis had 24 coming off the bench, followed by Westbrook, with 22; and point guard Paul, with 13 of his 16 assists.
George’s 41 points tied Westbrook’s record last year and is one short of Will Chamberlain’s 42 in 1962.
The Western Conference won five of the last six meetings, even without the support of Bryant, who hadn’t played since 2013 due to injuries. But players like Westbrook, Kevin Durant and Stepehn Curry, the MVP of the previous season, have stood up for that conference.
Another who praised Bryant was the legendary Michael Jordan, who pointed out that “Kobe has been an example player to follow. There were many exemplary players before me, during my generation and then until Kobe.
Jordan, now president of the Hornets, was in charge of receiving the torch in a ceremonial step that marks Charlotte as the site of the 2017 All-Star Game.

You can also read:  Rockets already have the best record in the NBA; Durant vindicates his leadership