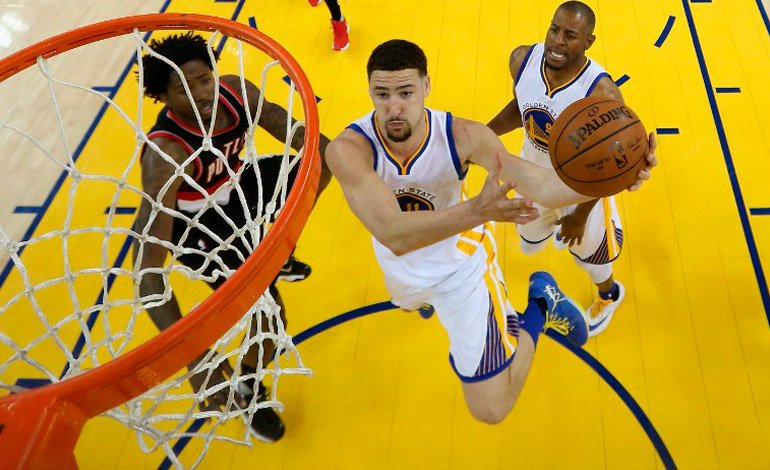 Nothing stops the Golden State Warriors, who were once again the big winners on this NBA day by getting their second consecutive win in the Western Conference semifinal series against the Portland Trail Blazers.
Meanwhile, the Miami Heat, despite having to go into overtime, ended with an important away victory at the start of the Eastern Conference semifinal series that they play against the Toronto Raptors
Shooting guard Klay Thompson continued to lead the attack for the Warriors, who after coming back from an 11-point deficit in the fourth quarter beat the Trail Blazers 110-99.
The win was the second for the defending league champions Warriors, taking a 2-0 lead in the best of seven games.
The third will be played next Saturday at the Moda Center in Portland and the Warriors could have star point guard Stephen Curry back with the team, who could not play in the first two due to a right knee injury.
Thompson, who had 27 points, scored a 3-pointer with 5:33 remaining in the game and the Warriors took the first lead of the game.
The Warriors’ star shooting guard, who in the previous game set his best playoff mark with 37 points, this time made five three-pointers.
Center Draymond Green was once again the team’s most complete player, scoring 17 points, 14 rebounds, seven assists and four blocks, which was also a winning factor and the one that made the comeback possible.
Reserve shooting guard Andre Inguodala was once again the sixth man for the Warriors, contributing 15 points, five rebounds, four assists and two ball recoveries.
While point guard Shaun Livingston, who continued to start in Curry’s position, contributed 14 points and forward Harrison Barnes scored 13 points and completed a list of five players who had double-digit numbers.
Livingston, who has replaced Curry in five games so far in the playoffs, has posted double figures in all of them.
Nigerian center Festus Ezeli, who came off the bench, also did a great individual and team job by contributing eight points and six rebounds.
Australian center Andrew Bogut, who started, got two blocks and reached 65 so far in the playoffs, the best mark in team history.
Base Damian Lillard repeated as leader of the Trail Blazers’ attack by getting 25 points and six assists, while shooting guard CJ McCollum reached 22 and the Portland team scored 13 triples.
The combination of Lillard and McCollum couldn’t prevent the Trail Blazers from losing their sixth straight trip to Oakland’s Oracle Arena, where the Warriors are 5-0 so far in playoff competition.
The Slovenian point guard Goran Dragic confirmed his great moment in the game and was once again the leader of the Heat’s attack, which in overtime won the Raptors 96-102 at home.
The win put the Heat up 1-0 in the best-of-seven series and robbed the Raptors of home court advantage.
On Thursday, again, at the Air Canada Centre, the second game of the series will be played.
The Heat, who could have won the game in regulation time had it not been for the brilliance of point guard Kyle Lowry’s 3-pointer from midfield tenths of a second before the buzzer sounded, received 26 points from Dragic, six rebounds and two assists.
While Wade, who was decisive in overtime – he scored seven points – concluded the game with 24 points, grabbed six rebounds, gave four assists, recovered two balls, lost four and made two blocks.
Forward Joe Johnson had 16 points, rookie guard Josh Richardson was the sixth man with 11 points, while Sudanese starter Luol Deng scored 10 and completed the list of the five Heat players who had double-digit numbers. .
Center Hassan Whiteside, although he missed two decisive shots with three seconds left in regulation time, was without a doubt the leader of the Heat’s inside game, capturing 17 rebounds, including 15 defensively, and scoring nine points.
The Heat dominated the Raptors inside the paint by capturing 52 rebounds for only 41 that the Raptors had, which confirmed the problems they have when it comes to maintaining consistency on offense.
The miracle of Lowry’s triple completed a six-point reaction by the Raptors, which they achieved in the last 20 seconds of regulation time, and which allowed them to get back into the game, in the end it was not enough nor was it enough for them to get the victory .
Lithuanian center Jonas Valanciunas with a double-double of 24 points (10-16, 0-0, 4-4), 14 rebounds -all defensive-, three assists, two ball recoveries, one loss, and three blocks was the Raptors leader in all facets of the game. EFE

You can also read:  USA out of the Basketball World Cup