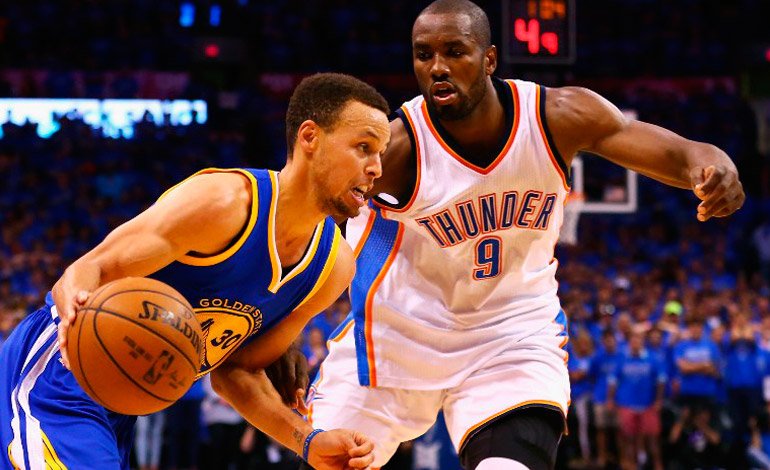 Once again, the great individual and team basketball that the Golden State Warriors have emerged at the decisive moment that allowed them to complete a comeback and win 101-108 away from the Oklahoma City Thunder in the sixth game of the finals of the Eastern Conference.
The combination of shooting guard Klay Thompson and point guard Stephen Curry produced 70 points and were once again the architects of a saving and decisive victory that kept the Warriors alive and also vindicated them as defending champions of the NBA title.
The victory allowed the Warriors to tie the series at 3-3 and force the seventh game that they will play next Monday, at the ORACLE Arena in Oakland, where the winner will face the Cleveland Cavaliers in the NBA Finals, champions in that of the East.
Thompson led the attack with 41 points on 11 of 18 three-pointers, a new record in the playoffs, while Curry narrowly missed a triple-double with 29 points, 10 rebounds, nine assists and turnovers.
The Warriors’ starting shooting guard was unstoppable on shots from outside the perimeter and kept the Golden State team in the game until Curry also emerged in the second half to complete a miraculous comeback that was decided down the stretch of the match.
Curry had not been brilliant in the first half, but he also asserted his status as Most Valuable Player (MVP) for two consecutive seasons and with 2:47 to go he scored a triple that tied the game at 99-99.
From that moment on, the Thunder disappeared and the Warriors emerged with reserve shooting guard Andre Iguodala, Thompson, who made three pointers and two personal shots, and Curry two other free throws and the game ended for the Oklahoma City team that came down with their stars, forward Kevin Durant and point guard Russell Westbrook, who hadn’t been inspired by the shots before either.
“I’m proud of all my teammates,” Thompson said at the conclusion of the game at the Chesapeake Energy Arena. “We were down most of the game, but we never gave up.”
The Thunder, who had dominated the third and fourth games they played on their field, saw how the Warriors destroyed them in the sixth by scoring 21 of 44 triple shots, while the Oklahoma City team only hit 3 of 23.
“We had a hard time having the shooting inspiration on this field, but when we got into the rhythm we imposed our will,” Curry said. “It was the game in which we showed that we are a team that knows how to improve ourselves”.
Center Draymond Green also achieved a double-double of 14 points, 12 rebounds, six assists and recovered three balls, while Iguodala was once again the sixth decisive player, who won the MVP award in the last NBA Finals.
Iguodala played 38 minutes of great contribution both defensively and in attack and showed it by achieving eight points, seven rebounds, one assist, recovered three balls, two decisive in the final stretch of the game, and lost a ball.
Curry missed all three of his field goals in the first period and didn’t score a point, while Green had three personal fouls at halftime but finished the game with five.
“We have emerged as a team at all times, when we suffered, but also by showing the confidence that there was to fight until the end without ever losing focus on our game,” said Steve Kerr, coach of the Warriors. “Opposite was a rival who also made merits to get the victory, the difference was having kept the fight until the end.”
The Warriors are looking to become the 10th team in NBA history after trailing 1-3 in the best-of-seven series.
The Golden State team had to come back eight points going into the fourth period, which was also dominated by the Thunder at the beginning, but little by little they lost confidence in their own game and allowed the Warriors to complete the comeback.
The Thunder had Durant as the leading scorer with 29 points, but he missed 21 shots from the field, while point guard Russell Westbrool contributed a double-double of 28 points, 11 assists, nine rebounds and four turnovers.
However, Westbrook also missed 17 of 27 field goals he made and Hispanic Congolese power forward Serge Ibaka became the third leading scorer for the Thunder by contributing 13 points.
Ibaka played 36 minutes in which he scored 5 of 10 shots from the field, including a triple of six attempts, and 2 of 5 free throws.
The Spanish international captured nine rebounds, including eight defensive ones and put up three blocks, which did not prevent the defeat of the Thunder either. EFE

You can also read:  Kevin Durant will miss at least the first game of the NBA Finals