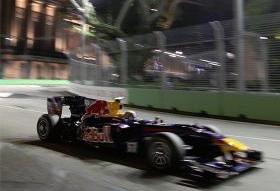 SINGAPORE, (As.com).- The Australian driver Mark Webber (Red Bull) has achieved the best time in the first free practice session of the Singapore Grand Prix, in which the Spaniards Jaime Alguersuari (Toro Rosso) and Fernando Alonso (Ferrari) have been fifth and eleventh, respectively. This first session was held on a wet track as a result of the rain that fell an hour and a half before the start of practice and forced the riders to ride for much of the practice on intermediate tires due to the presence of some puddles in the asphalt.

Webber has led the German Michael Schumacher (Mercedes GP) by 119 thousandths of a second and the also German Adrián Sutil (Force India) by 238.

You can also read:  Dakar begins its final stretch between dunes and heat

Alguersuari finished fifth, just over half a second behind Webber, while Alonso finished in eleventh position, one and a half seconds off the Australian’s best time.