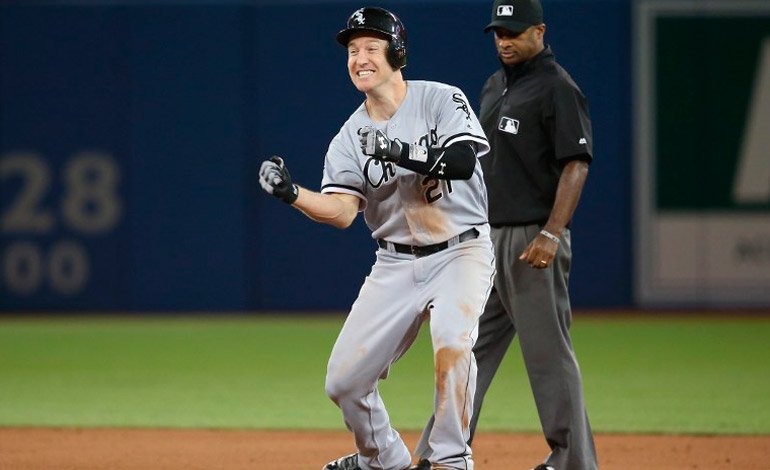 The Chicago White Sox continued their winning streak in American League professional baseball competition as veteran Dominican slugger Albert Pujols surpassed the legendary Reggie Jackson on the all-time home run list.
Todd Frazier drove in the go-ahead run with a double in a five-run seventh inning, and the White Sox beat the Toronto Blue Jays 7-5.
Frazier went 2-for-3 with three RBIs for Chicago, which overturned a four-run deficit to earn its fourth straight win and cement its lead in the Central Division.
Zach Putnam (1-0) pitched 1 1/3 innings to win, while relievers Dan Jennings, Matt Albers and David Robertson handled the rest, with the latter earning his eighth save.
Toronto starter Marcus Stroman looked like he was winning his eighth straight start after giving up one run on four hits in six innings, but everything changed in the seventh.
Stroman stayed in the game after being hit in the left elbow by a drive by catcher Dioner Navarro and walked Austin Jackson with four pitches to load the bases.
Brett Cecil (0-4) relieved and allowed a two-run single to Adam Eaton and then an RBI single to Jimmy Rollins, bringing Chicago within 5-4 before Frazier came on with his two-run double.
Despite the loss, the Latin bat was present with the Blue Jays after the Dominicans José Bautista went 2-3, two runs scored; and Edwin Encarnación 5-2, three RBIs. The Venezuelan Ezequiel Carrera 5-2.
Pujols hit two homers and outfielder Mike Trout added another to lift the Los Angeles Angels to a 6-1 victory over the Kansas City Royals.
Starter Garrett Richards (1-3) pitched three-hit ball into the seventh inning for his first win of the season, while the Angels’ inconsistent offense produced a three-run first inning followed by home runs by their two other players. important.
Pujols hit solo homers in the third and fifth innings off Ian Kennedy (2-2). They were the 564th and 565th homers of the Dominican’s career, which broke the tie with Jackson to move to thirteenth place in the standings.
Trout added another solo homer in the seventh inning, his fourth this season.
Salvador Pérez drove in the only run for the Royals.
Taijuan Walker matched his career high with 11 strikeouts in seven innings, Leonys Martin and Kyle Seager hit solo homers and the Seattle Mariners beat the Houston Astros 3-2 for their eighth win in 11 games.
Walker was unstoppable in his fourth start of the season. The 23-year-old pitcher pitched seven innings and struck out the last six batters he faced, retiring the Astros in order in the sixth and seventh innings.
This is the third time in his short career that Walker (2-0) has struck out 11 opposing batters.
Martin hit his fourth homer of the season to right field to lead off the third inning off Houston starter Doug Fister (1-3), and Seager followed it up an inning later with a solo homer to right-center field. With this, Seager adds 100 home runs in his career.
The Mariners had the support of the Latino batting with the Dominicans Robinson Canó 3-1, with an RBI and Ketel Marte 3-1, with a run scored. Martín went 1-2, with a run scored and an RBI.
Oswaldo Arcia led off the ninth inning with a home run off Zach McAllister as the Minnesota Twins beat the Cleveland Indians 4-3.
Brian Dozier had a two-run double, and the Twins’ fatigued bullpen allowed only one run in the final 4 1/3 innings, as Minnesota snapped a three-game losing streak.
Kevin Jepsen (1-3) worked out the ninth for the win.
Brazilian Yan Gomes homered and Michael Brantley made his debut this season, appearing as a pinch hitter in the eighth inning for the Indians, who saw a three-game winning streak snapped.
McAllister (1-1) gave up his first run in nine appearances this season.
Prominence of the Latin batting in both teams with the Dominicans Carlos Santana 4-2 with a run scored, Juan Uribe 4-2, José Ramírez 4-2. Brazilian Gomes 3-1 with a run scored and an produced by the Indians.
While the Twins had fellow Dominicans Eduardo Núñez 3-0 with a run scored, Miguel Sanó 3-1 with an RBI, Danny Santana 3-1 with a run scored. Arcia is 4-1 with a run scored and an RBI.
Nathan Eovaldi knew he was throwing a no-hitter. Although the right-hander did not succeed, he was satisfied with his performance of more than seven episodes without admitting a career.
Eovaldi lost his no-hitter in the seventh, but pitched into the eighth for the New York Yankees, who beat the Texas Rangers 3-1.
In other results of the day, the Tampa Bay Rays beat the Baltimore Orioles 2-0 and the Detroit Tigers beat the Oakland Athletics 7-3.EFE

You can also read:  With "home run" Dubón gave victory to the Giants