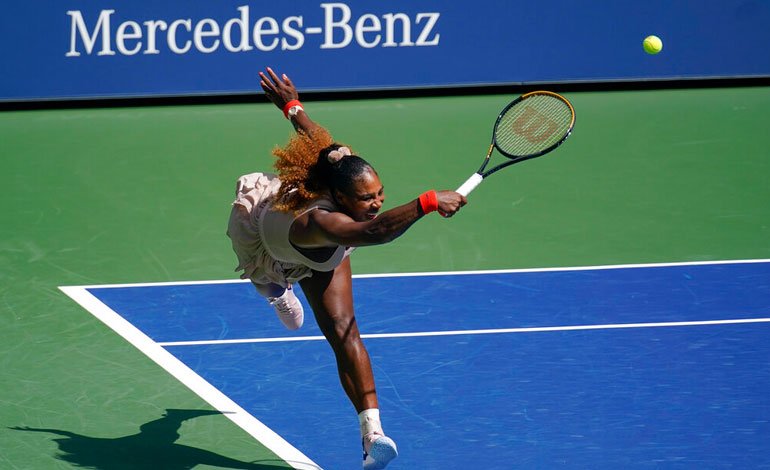 With another display of strength, talent and determination at 38 years old, American Serena Williams defeated the fierce Greek tennis player Maria Sakkari on Monday and advanced to the quarterfinals of the United States Open in her fight for her twenty-fourth Grand title. Slam.

The American, who does not falter on her way to her seventh crown in New York, faced a rival on Monday who had just defeated her in the Premier tournament in Cincinnati, just a week before the US Open.

Sakkari, number 22 of the WTA, brought out her powerful serve early, with 3 ‘aces’ in the first game she served, trying to have control of the game and wear down the American.

But Williams was also very successful with her serve (12 ‘aces’ in the entire match to 13 from Sakkari) and took the first set 6-3.

You can also read:  Serena eliminates the Spanish Suárez and goes to the quarterfinals at Wimbledon

The American paid the emotional blow and was 2-0 against in the third and final round, attracting the ghosts of her defeat in the Cincinnati tournament, in which Sakkari also rallied a set in favor.

“Of course I thought about it, but very little,” Serena said afterward. “It was a completely different game, a different setting and a different time. I just kept fighting, “added the current world number 8.

Williams found a light in the failures of the Greek with the first service, giving her the opportunity to take the rhythm of the points. The American won 59% of the points in her second serve, by 48% of her rival.

You can also read:  Europe, with Nadal and Federer, starts as a great favorite in the third edition

In the fourth game, Serena broke the serve of Sakkari (number 22 in the WTA) and did it again with 4-3, putting the victory and the rematch on a plate to seal it with her serve.

“She played very well and I didn’t take my chances,” Sakkari acknowledged. And if you don’t take your chances against Serena Williams, you’re done.

Beating Sakkari, Williams achieved his 100th victory on the Arthur Ashe court, a mark that no other tennis player had achieved.

I hadn’t really thought about it. I just played, to have fun and give the best of myself, “said the American, who could not celebrate the feat with her fans although she said that her absence also helps her feel less pressured.

You can also read:  Nadal overwhelms Mackenzie McDonald and goes to third round at Roland Garros

“There is definitely less pressure (…) But I love the fans and I miss them,” he stressed.

Williams will face in the quarterfinals the winner of Monday’s round of 16 crossing between France’s Alizé Cornet and Bulgarian Tsvetana Pironkova, who returns from a three-year maternity retirement and was the executioner of Spain’s Garbiñe Muguruza in the second round.

It has been more than three years since Williams won her 23rd Grand Slam title at the 2017 Australian Open, when she was already pregnant with her daughter Olympia.

Since then she has reached four Grand Slam finals but has failed to clinch the 24th crown that would equal Margaret Court’s record.

A victory in Saturday’s final would also allow him to separate from Chris Evert, who also held six US Open titles, as the greatest New York Grand Slam champion in the modern era. AFP (HN).