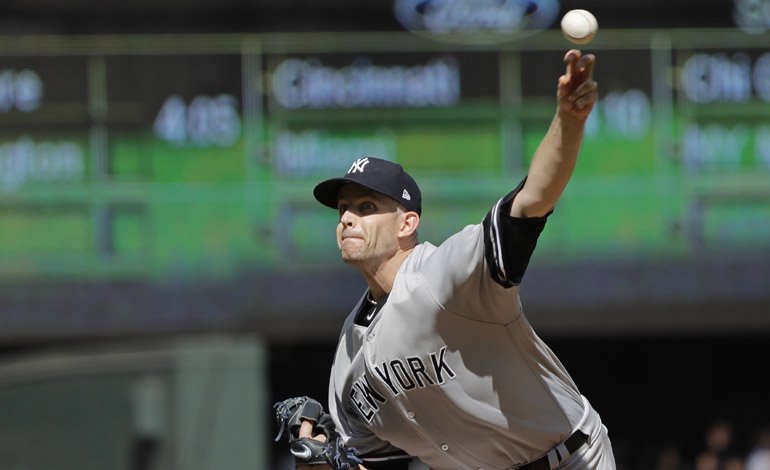 Music blared through the clubhouse, even though the door to manager Aaron Boone’s office was locked. It was the song “New York, New York.”

And some players added their voices to the Frank Sinatra recording. The Yankees had one more reason to be happy this season.

They officially ended the Boston Red Sox’s three-year reign in the AL East by winning a 5-0 shutout on Monday, thanks to another great performance from James Paxton.

“It’s absolutely amazing,” Paxton said. “As a team, we feel really confident now, and it feels wonderful to take down these guys.”

Hours after the Red Sox fired their president of sports operations Dave Dombrowski and in a duel that began with David Ortiz’s return to Fenway Park, Boston was painted white, something that had not happened at home this season.

Ortiz, the former Dominican from Boston, threw the first ball, three months after being shot in his native Dominican Republic.

Boston trailed 18 1/2 games behind the division-leading Yankees with 18 games remaining.

The Red Sox, champions of the last World Series, are still looking for a playoff berth, but with little real chance. They started the day eight games behind the team that currently has the second wild card berth in the AL.

Paxton (13-6) won his eighth straight start, accepting four hits in 6 2/3 innings. The Yankees increased their lead over Tampa Bay, which is second in the East Division, to nine games.

You can also read:  Kershaw strikes out 13 in Dodgers win over Cubs

New York started the day tied with the best record in the majors, improving to 45 games above the .500 mark.

Austin Romine and Gio Urshela each hit solo home runs for the Yankees, who won the last three games of a four-game series and finished the season 14-5 against the Red Sox, their staunch rivals.

“Its not about talent. We are very talented. It just happened that, for 19 games, they were better than us, ”said Boston’s Puerto Rican manager Alex Cora.

New York extended its franchise record to 270 home runs, one night after setting the new record.

Paxton struck out seven and walked three for a career-best win number.

You can also read:  Lions and Giants split honors in Dominican baseball doubleheader

Venezuelan Eduardo Rodríguez (17-6) allowed one run in six innings, during which he struck out nine, allowed five hits and walked one.

For the Yankees, Venezuelan Gleyber Torres 4-2 with an RBI. Dominican Edwin Encarnacion 5-1. Colombian Gio Urshela 4-2 with one scored and one produced.